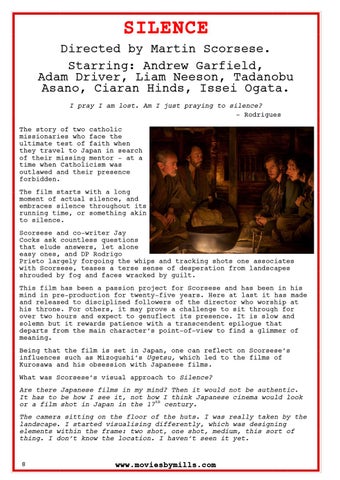 SILENCE Directed by Martin Scorsese. Starring: Andrew Garfield, Adam Driver, Liam Neeson, Tadanobu Asano, Ciaran Hinds, Issei Ogata. I pray I am lost. Am I just praying to silence? - Rodrigues The story of two catholic missionaries who face the ultimate test of faith when they travel to Japan in search of their missing mentor – at a time when Catholicism was outlawed and their presence forbidden. The film starts with a long moment of actual silence, and embraces silence throughout its running time, or something akin to silence. Scorsese and co-writer Jay Cocks ask countless questions that elude answers, let alone easy ones, and DP Rodrigo Prieto largely forgoing the whips and tracking shots one associates with Scorsese, teases a terse sense of desperation from landscapes shrouded by fog and faces wracked by guilt. This film has been a passion project for Scorsese and has been in his mind in pre-production for twenty-five years. Here at last it has made and released to disciplined followers of the director who worship at his throne. For others, it may prove a challenge to sit through for over two hours and expect to genuflect its presence. It is slow and solemn but it rewards patience with a transcendent epilogue that departs from the main character’s point-of-view to find a glimmer of meaning. Being that the film is set in Japan, one can reflect on Scorsese’s influences such as Mizogushi’s Ugetsu, which led to the films of Kurosawa and his obsession with Japanese films. What was Scorsese’s visual approach to Silence? Are there Japanese films in my mind? Then it would not be authentic. It has to be how I see it, not how I think Japanese cinema would look or a film shot in Japan in the 17th century. The camera sitting on the floor of the huts. I was really taken by the landscape. I started visualising differently, which was designing elements within the frame: two shot, one shot, medium, this sort of thing. I don’t know the location. I haven’t seen it yet.