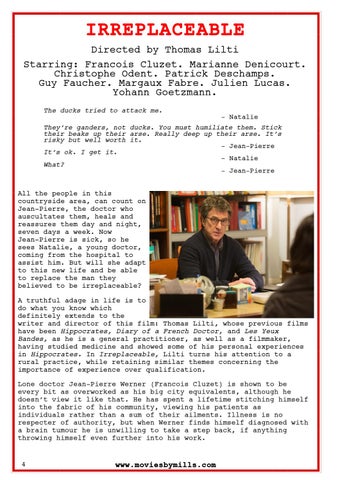 IRREPLACEABLE Directed by Thomas Lilti Starring: Francois Cluzet. Marianne Denicourt. Christophe Odent. Patrick Deschamps. Guy Faucher. Margaux Fabre. Julien Lucas. Yohann Goetzmann. The ducks tried to attack me. - Natalie They’re ganders, not ducks. You must humiliate them. Stick their beaks up their arse. Really deep up their arse. It’s risky but well worth it. - Jean-Pierre It’s ok. I get it. - Natalie What? - Jean-Pierre

All the people in this countryside area, can count on Jean-Pierre, the doctor who auscultates them, heals and reassures them day and night, seven days a week. Now Jean-Pierre is sick, so he sees Natalie, a young doctor, coming from the hospital to assist him. But will she adapt to this new life and be able to replace the man they believed to be irreplaceable? A truthful adage in life is to do what you know which definitely extends to the writer and director of this film: Thomas Lilti, whose previous films have been Hippocrates, Diary of a French Doctor, and Les Yeux Bandes, as he is a general practitioner, as well as a filmmaker, having studied medicine and showed some of his personal experiences in Hippocrates. In Irreplaceable, Lilti turns his attention to a rural practice, while retaining similar themes concerning the importance of experience over qualification. Lone doctor Jean-Pierre Werner (Francois Cluzet) is shown to be every bit as overworked as his big city equivalents, although he doesn’t view it like that. He has spent a lifetime stitching himself into the fabric of his community, viewing his patients as individuals rather than a sum of their ailments. Illness is no respecter of authority, but when Werner finds himself diagnosed with a brain tumour he is unwilling to take a step back, if anything throwing himself even further into his work.