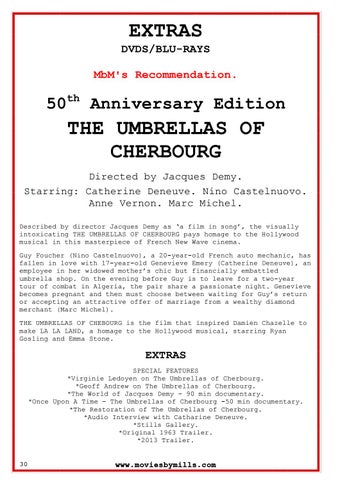 THE UMBRELLAS OF CHERBOURG Directed by Jacques Demy. Starring: Catherine Deneuve. Nino Castelnuovo. Anne Vernon. Marc Michel. Described by director Jacques Demy as ‘a film in song’, the visually intoxicating THE UMBRELLAS OF CHERBOURG pays homage to the Hollywood musical in this masterpiece of French New Wave cinema. Guy Foucher (Nino Castelnuovo), a 20-year-old French auto mechanic, has fallen in love with 17-year-old Genevieve Emery (Catherine Deneuve), an employee in her widowed mother’s chic but financially embattled umbrella shop. On the evening before Guy is to leave for a two-year tour of combat in Algeria, the pair share a passionate night. Genevieve becomes pregnant and then must choose between waiting for Guy’s return or accepting an attractive offer of marriage from a wealthy diamond merchant (Marc Michel). THE UMBRELLAS OF CHEBOURG is the film that inspired Damien Chazelle to make LA LA LAND, a homage to the Hollywood musical, starring Ryan Gosling and Emma Stone.