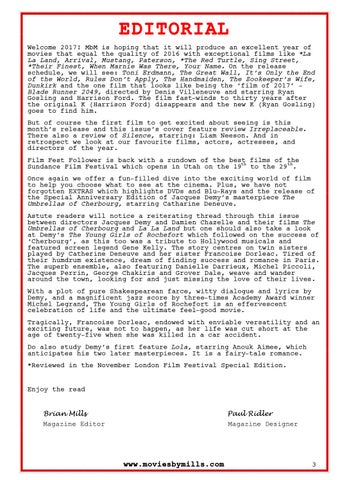 EDITORIAL Welcome 2017! MbM is hoping that it will produce an excellent year of movies that equal the quality of 2016 with exceptional films like *La La Land, Arrival, Mustang, Paterson, *The Red Turtle, Sing Street, *Their Finest, When Marnie Was There, Your Name. On the release schedule, we will see: Toni Erdmann, The Great Wall, It’s Only the End of the World, Rules Don’t Apply, The Handmaiden, The Zookeeper’s Wife, Dunkirk and the one film that looks like being the ‘film of 2017’ – Blade Runner 2049, directed by Denis Villeneuve and starring Ryan Gosling and Harrison Ford. The film fast-winds to thirty years after the original K (Harrison Ford) disappears and the new K (Ryan Gosling) goes to find him. But of course the first film to get excited about seeing is this month’s release and this issue’s cover feature review Irreplaceable. There also a review of Silence, starring: Liam Neeson. And in retrospect we look at our favourite films, actors, actresses, and directors of the year. Film Fest Follower is back with a rundown of the best films of the Sundance Film Festival which opens in Utah on the 19th to the 29th. Once again we offer a fun-filled dive into the exciting world of film to help you choose what to see at the cinema. Plus, we have not forgotten EXTRAS which highlights DVDs and Blu-Rays and the release of the Special Anniversary Edition of Jacques Demy’s masterpiece The Umbrellas of Cherbourg, starring Catharine Deneuve. Astute readers will notice a reiterating thread through this issue between directors Jacques Demy and Damien Chazelle and their films The Umbrellas of Cherbourg and La La Land but one should also take a look at Demy’s The Young Girls of Rochefort which followed on the success of ‘Cherbourg’, as this too was a tribute to Hollywood musicals and featured screen legend Gene Kelly. The story centres on twin sisters played by Catherine Deneuve and her sister Francoise Dorleac. Tired of their humdrum existence, dream of finding success and romance in Paris. The superb ensemble, also featuring Danielle Darrieux, Michel Piccoli, Jacques Perrin, George Chakiris and Grover Dale, weave and wander around the town, looking for and just missing the love of their lives. With a plot of pure Shakespearean farce, witty dialogue and lyrics by Demy, and a magnificent jazz score by three-times Academy Award winner Michel Legrand, The Young Girls of Rochefort is an effervescent celebration of life and the ultimate feel-good movie. Tragically, Francoise Dorleac, endowed with enviable versatility and an exciting future, was not to happen, as her life was cut short at the age of twenty-five when she was killed in a car accident. Do also study Demy’s first feature Lola, starring Anouk Aimee, which anticipates his two later masterpieces. It is a fairy-tale romance. *Reviewed in the November London Film Festival Special Edition.