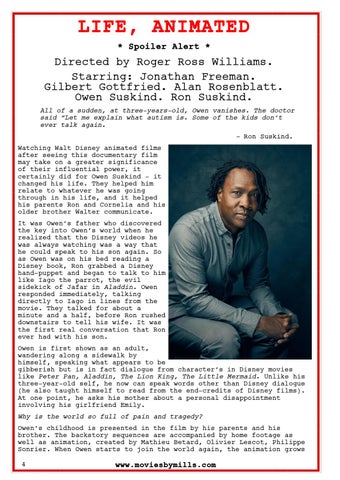 Directed by Roger Ross Williams. Starring: Jonathan Freeman. Gilbert Gottfried. Alan Rosenblatt. Owen Suskind. Ron Suskind. All of a sudden, at three-years-old, Owen vanishes. The doctor said “Let me explain what autism is. Some of the kids don’t ever talk again. - Ron Suskind. Watching Walt Disney animated films after seeing this documentary film may take on a greater significance of their influential power, it certainly did for Owen Suskind – it changed his life. They helped him relate to whatever he was going through in his life, and it helped his parents Ron and Cornelia and his older brother Walter communicate. It was Owen’s father who discovered the key into Owen’s world when he realized that the Disney videos he was always watching was a way that he could speak to his son again. So as Owen was on his bed reading a Disney book, Ron grabbed a Disney hand-puppet and began to talk to him like Iago the parrot, the evil sidekick of Jafar in Aladdin. Owen responded immediately, talking directly to Iago in lines from the movie. They talked for about a minute and a half, before Ron rushed downstairs to tell his wife. It was the first real conversation that Ron ever had with his son. Owen is first shown as an adult, wandering along a sidewalk by himself, speaking what appears to be gibberish but is in fact dialogue from character’s in Disney movies like Peter Pan, Aladdin, The Lion King, The Little Mermaid. Unlike his three-year-old self, he now can speak words other than Disney dialogue (he also taught himself to read from the end-credits of Disney films). At one point, he asks his mother about a personal disappointment involving his girlfriend Emily. Why is the world so full of pain and tragedy? Owen’s childhood is presented in the film by his parents and his brother. The backstory sequences are accompanied by home footage as well as animation, created by Mathieu Betard, Olivier Lescot, Philippe Sonrier. When Owen starts to join the world again, the animation grows 4