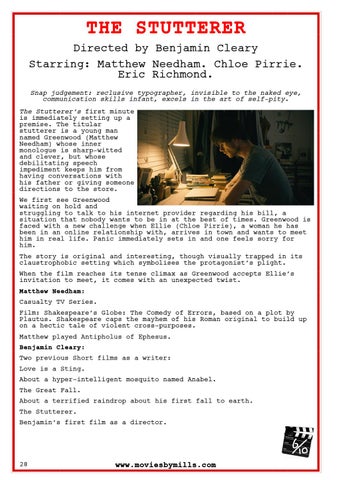 THE STUTTERER Directed by Benjamin Cleary Starring: Matthew Needham. Chloe Pirrie. Eric Richmond. Snap judgement: reclusive typographer, invisible to the naked eye, communication skills infant, excels in the art of self-pity. The Stutterer’s first minute is immediately setting up a premise. The titular stutterer is a young man named Greenwood (Matthew Needham) whose inner monologue is sharp-witted and clever, but whose debilitating speech impediment keeps him from having conversations with his father or giving someone directions to the store. We first see Greenwood waiting on hold and struggling to talk to his internet provider regarding his bill, a situation that nobody wants to be in at the best of times. Greenwood is faced with a new challenge when Ellie (Chloe Pirrie), a woman he has been in an online relationship with, arrives in town and wants to meet him in real life. Panic immediately sets in and one feels sorry for him. The story is original and interesting, though visually trapped in its claustrophobic setting which symbolises the protagonist’s plight. When the film reaches its tense climax as Greenwood accepts Ellie’s invitation to meet, it comes with an unexpected twist. Matthew Needham: Casualty TV Series. Film: Shakespeare’s Globe: The Comedy of Errors, based on a plot by Plautus. Shakespeare caps the mayhem of his Roman original to build up on a hectic tale of violent cross-purposes. Matthew played Antipholus of Ephesus. Benjamin Cleary: Two previous Short films as a writer: Love is a Sting. About a hyper-intelligent mosquito named Anabel. The Great Fall. About a terrified raindrop about his first fall to earth. The Stutterer. Benjamin’s first film as a director.