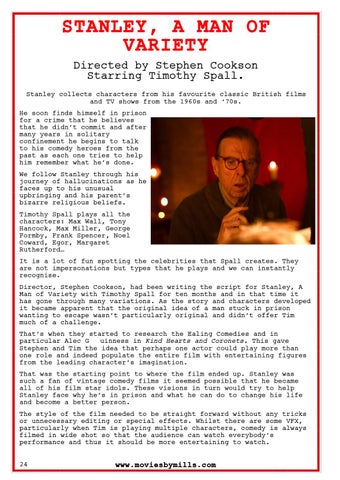 STANLEY, A MAN OF VARIETY Directed by Stephen Cookson Starring Timothy Spall. Stanley collects characters from his favourite classic British films and TV shows from the 1960s and ‘70s. He soon finds himself in prison for a crime that he believes that he didn’t commit and after many years in solitary confinement he begins to talk to his comedy heroes from the past as each one tries to help him remember what he’s done. We follow Stanley through his journey of hallucinations as he faces up to his unusual upbringing and his parent’s bizarre religious beliefs. Timothy Spall plays all the characters: Max Wall, Tony Hancock, Max Miller, George Formby, Frank Spencer, Noel Coward, Egor, Margaret Rutherford… It is a lot of fun spotting the celebrities that Spall creates. They are not impersonations but types that he plays and we can instantly recognise. Director, Stephen Cookson, had been writing the script for Stanley, A Man of Variety with Timothy Spall for ten months and in that time it has gone through many variations. As the story and characters developed it became apparent that the original idea of a man stuck in prison wanting to escape wasn’t particularly original and didn’t offer Tim much of a challenge. That’s when they started to research the Ealing Comedies and in particular Alec G uinness in Kind Hearts and Coronets. This gave Stephen and Tim the idea that perhaps one actor could play more than one role and indeed populate the entire film with entertaining figures from the leading character’s imagination. That was the starting point to where the film ended up. Stanley was such a fan of vintage comedy films it seemed possible that he became all of his film star idols. These visions in turn would try to help Stanley face why he’s in prison and what he can do to change his life and become a better person. The style of the film needed to be straight forward without any tricks or unnecessary editing or special effects. Whilst there are some VFX, particularly when Tim is playing multiple characters, comedy is always filmed in wide shot so that the audience can watch everybody’s performance and thus it should be more entertaining to watch. 24