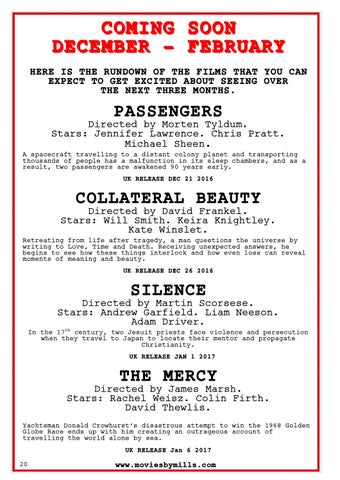 HERE IS THE RUNDOWN OF THE FILMS THAT YOU CAN EXPECT TO GET EXCITED ABOUT SEEING OVER THE NEXT THREE MONTHS.

Directed by Morten Tyldum. Stars: Jennifer Lawrence. Chris Pratt. Michael Sheen. A spacecraft travelling to a distant colony planet and transporting thousands of people has a malfunction in its sleep chambers, and as a result, two passengers are awakened 90 years early. UK RELEASE DEC 21 2016

Directed by David Frankel. Stars: Will Smith. Keira Knightley. Kate Winslet. Retreating from life after tragedy, a man questions the universe by writing to Love, Time and Death. Receiving unexpected answers, he begins to see how these things interlock and how even loss can reveal moments of meaning and beauty. UK RELEASE DEC 26 2016