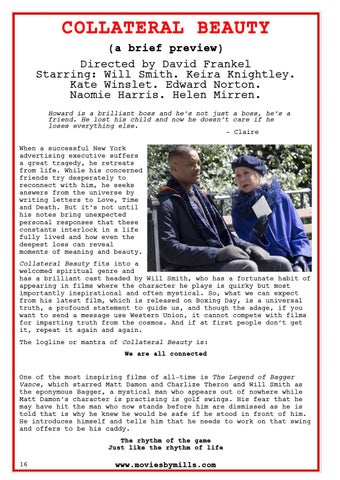 COLLATERAL BEAUTY (a brief preview) Directed by David Frankel Starring: Will Smith. Keira Knightley. Kate Winslet. Edward Norton. Naomie Harris. Helen Mirren. Howard is a brilliant boss and he’s not just a boss, he’s a friend. He lost his child and now he doesn’t care if he loses everything else. - Claire When a successful New York advertising executive suffers a great tragedy, he retreats from life. While his concerned friends try desperately to reconnect with him, he seeks answers from the universe by writing letters to Love, Time and Death. But it’s not until his notes bring unexpected personal responses that these constants interlock in a life fully lived and how even the deepest loss can reveal moments of meaning and beauty. Collateral Beauty fits into a welcomed spiritual genre and has a brilliant cast headed by Will Smith, who has a fortunate habit of appearing in films where the character he plays is quirky but most importantly inspirational and often mystical. So, what we can expect from his latest film, which is released on Boxing Day, is a universal truth, a profound statement to guide us, and though the adage, if you want to send a message use Western Union, it cannot compete with films for imparting truth from the cosmos. And if at first people don’t get it, repeat it again and again.

The logline or mantra of Collateral Beauty is: We are all connected

One of the most inspiring films of all-time is The Legend of Bagger Vance, which starred Matt Damon and Charlize Theron and Will Smith as the eponymous Bagger, a mystical man who appears out of nowhere while Matt Damon’s character is practising is golf swings. His fear that he may have hit the man who now stands before him are dismissed as he is told that is why he knew he would be safe if he stood in front of him. He introduces himself and tells him that he needs to work on that swing and offers to be his caddy.