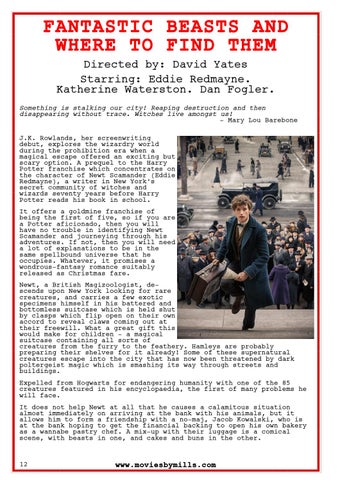 FANTASTIC BEASTS AND WHERE TO FIND THEM Directed by: David Yates Starring: Eddie Redmayne. Katherine Waterston. Dan Fogler. Something is stalking our city! Reaping destruction and then disappearing without trace. Witches live amongst us! - Mary Lou Barebone

J.K. Rowlands, her screenwriting debut, explores the wizardry world during the prohibition era when a magical escape offered an exciting but scary option. A prequel to the Harry Potter franchise which concentrates on the character of Newt Scamander (Eddie Redmayne), a writer in New Yorkâ&#x20AC;&#x2122;s secret community of witches and wizards seventy years before Harry Potter reads his book in school. It offers a goldmine franchise of being the first of five, so if you are a Potter aficionado, then you will have no trouble in identifying Newt Scamander and journeying through his adventures. If not, then you will need a lot of explanations to be in the same spellbound universe that he occupies. Whatever, it promises a wondrous-fantasy romance suitably released as Christmas fare. Newt, a British Magizoologist, descends upon New York looking for rare creatures, and carries a few exotic specimens himself in his battered and bottomless suitcase which is held shut by clasps which flip open on their own accord to reveal claws coming out at their freewill. What a great gift this would make for children â&#x20AC;&#x201C; a magical suitcase containing all sorts of creatures from the furry to the feathery. Hamleys are probably preparing their shelves for it already! Some of these supernatural creatures escape into the city that has now been threatened by dark poltergeist magic which is smashing its way through streets and buildings. Expelled from Hogwarts for endangering humanity with one of the 85 creatures featured in his encyclopaedia, the first of many problems he will face. It does not help Newt at all that he causes a calamitous situation almost immediately on arriving at the bank with his animals, but it allows him to form a friendship with a no-maj, Jacob Kowalski, who is at the bank hoping to get the financial backing to open his own bakery as a wannabe pastry chef. A mix-up with their luggage is a comical scene, with beasts in one, and cakes and buns in the other.