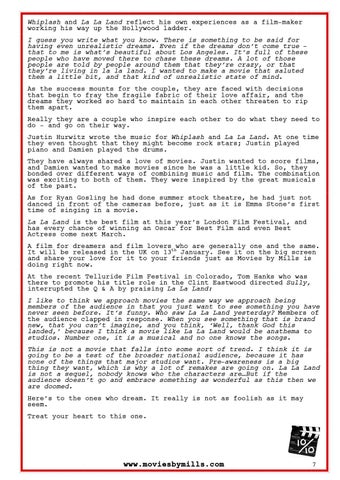 Whiplash and La La Land reflect his own experiences as a film-maker working his way up the Hollywood ladder.

I guess you write what you know. There is something to be said for having even unrealistic dreams. Even if the dreams don’t come true – that to me is what’s beautiful about Los Angeles. It’s full of these people who have moved there to chase these dreams. A lot of those people are told by people around them that they’re crazy, or that they’re living in la la land. I wanted to make a movie that saluted them a little bit, and that kind of unrealistic state of mind. As the success mounts for the couple, they are faced with decisions that begin to fray the fragile fabric of their love affair, and the dreams they worked so hard to maintain in each other threaten to rip them apart. Really they are a couple who inspire each other to do what they need to do – and go on their way. Justin Hurwitz wrote the music for Whiplash and La La Land. At one time they even thought that they might become rock stars; Justin played piano and Damien played the drums. They have always shared a love of movies. Justin wanted to score films, and Damien wanted to make movies since he was a little kid. So, they bonded over different ways of combining music and film. The combination was exciting to both of them. They were inspired by the great musicals of the past. As for Ryan Gosling he had done summer stock theatre, he had just not danced in front of the cameras before, just as it is Emma Stone’s first time of singing in a movie. La La Land is the best film at this year’s London Film Festival, and has every chance of winning an Oscar for Best Film and even Best Actress come next March. A film for dreamers and film loversthwho are generally one and the same. It will be released in the UK on 13 January. See it on the big screen and share your love for it to your friends just as Movies by Mills is doing right now. At the recent Telluride Film Festival in Colorado, Tom Hanks who was there to promote his title role in the Clint Eastwood directed Sully, interrupted the Q & A by praising La La Land: I like to think we approach movies the same way we approach being members of the audience in that you just want to see something you have never seen before. It’s funny. Who saw La La Land yesterday? Members of the audience clapped in response. When you see something that is brand new, that you can’t imagine, and you think, ‘Well, thank God this landed,’ because I think a movie like La La Land would be anathema to studios. Number one, it is a musical and no one knows the songs. This is not a movie that falls into some sort of trend. I think it is going to be a test of the broader national audience, because it has none of the things that major studios want. Pre-awareness is a big thing they want, which is why a lot of remakes are going on. La La Land is not a sequel, nobody knows who the characters are…But if the audience doesn’t go and embrace something as wonderful as this then we are doomed. Here’s to the ones who dream. It really is not as foolish as it may seem. Treat your heart to this one.