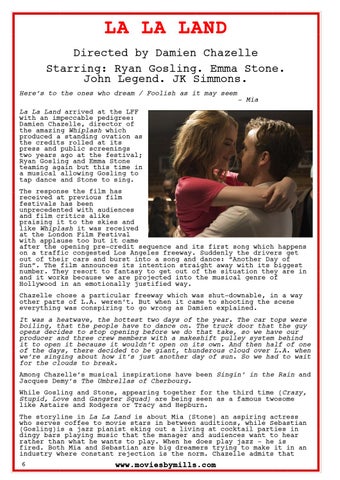 LA LA LAND Directed by Damien Chazelle Starring: Ryan Gosling. Emma Stone. John Legend. JK Simmons. Here’s to the ones who dream / Foolish as it may seem - Mia La La Land arrived at the LFF with an impeccable pedigree: Damien Chazelle, director of the amazing Whiplash which produced a standing ovation as the credits rolled at its press and public screenings two years ago at the festival; Ryan Gosling and Emma Stone teaming again but this time in a musical allowing Gosling to tap dance and Stone to sing. The response the film has received at previous film festivals has been unprecedented with audiences and film critics alike praising it to the skies and like Whiplash it was received at the London Film Festival with applause too but it came after the opening pre-credit sequence and its first song which happens on a traffic congested Los Angeles freeway. Suddenly the drivers get out of their cars and burst into a song and dance: “Another Day of Sun”. The film announces its intention straight away with its biggest number. They resort to fantasy to get out of the situation they are in and it works because we are projected into the musical genre of Hollywood in an emotionally justified way. Chazelle chose a particular freeway which was shut-downable, in a way other parts of L.A. weren’t. But when it came to shooting the scene everything was conspiring to go wrong as Damien explained. It was a heatwave, the hottest two days of the year. The car tops were boiling, that the people have to dance on. The truck door that the guy opens decides to stop opening before we do that take, so we have our producer and three crew members with a makeshift pulley system behind it to open it because it wouldn’t open on its own. And then half of one of the days, there decided to be giant, thunderous cloud over L.A. when we’re singing about how it’s just another day of sun. So we had to wait for the clouds to break. Among Chazelle’s musical inspirations have been Singin’ in the Rain and Jacques Demy’s The Umbrellas of Cherbourg. While Gosling and Stone, appearing together for the third time (Crazy, Stupid, Love and Gangster Squad) are being seen as a famous twosome like Astaire and Rodgers or Tracy and Hepburn. The storyline in La La Land is about Mia (Stone) an aspiring actress who serves coffee to movie stars in between auditions, while Sebastian (Gosling)is a jazz pianist eking out a living at cocktail parties in dingy bars playing music that the manager and audiences want to hear rather than what he wants to play. When he does play jazz – he is fired. Both Mia and Sebastian are big dreamers trying to make it in an industry where constant rejection is the norm. Chazelle admits that 6