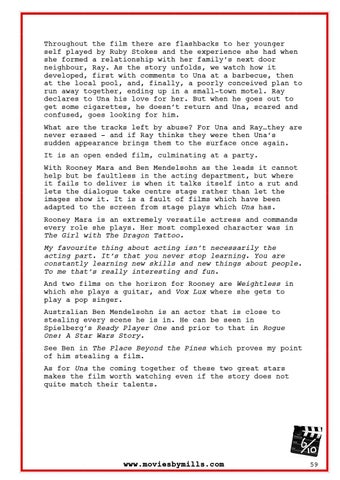 Throughout the film there are flashbacks to her younger self played by Ruby Stokes and the experience she had when she formed a relationship with her family’s next door neighbour, Ray. As the story unfolds, we watch how it developed, first with comments to Una at a barbecue, then at the local pool, and, finally, a poorly conceived plan to run away together, ending up in a small-town motel. Ray declares to Una his love for her. But when he goes out to get some cigarettes, he doesn’t return and Una, scared and confused, goes looking for him. What are the tracks left by abuse? For Una and Ray…they are never erased – and if Ray thinks they were then Una’s sudden appearance brings them to the surface once again. It is an open ended film, culminating at a party. With Rooney Mara and Ben Mendelsohn as the leads it cannot help but be faultless in the acting department, but where it fails to deliver is when it talks itself into a rut and lets the dialogue take centre stage rather than let the images show it. It is a fault of films which have been adapted to the screen from stage plays which Una has. Rooney Mara is an extremely versatile actress and commands every role she plays. Her most complexed character was in The Girl with The Dragon Tattoo. My favourite thing about acting isn’t necessarily the acting part. It’s that you never stop learning. You are constantly learning new skills and new things about people. To me that’s really interesting and fun. And two films on the horizon for Rooney are Weightless in which she plays a guitar, and Vox Lux where she gets to play a pop singer. Australian Ben Mendelsohn is an actor that is close to stealing every scene he is in. He can be seen in Spielberg’s Ready Player One and prior to that in Rogue One: A Star Wars Story. See Ben in The Place Beyond the Pines which proves my point of him stealing a film. As for Una the coming together of these two great stars makes the film worth watching even if the story does not quite match their talents.