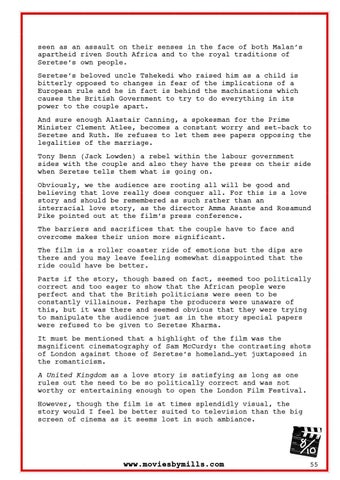 seen as an assault on their senses in the face of both Malan’s apartheid riven South Africa and to the royal traditions of Seretse’s own people. Seretse’s beloved uncle Tshekedi who raised him as a child is bitterly opposed to changes in fear of the implications of a European rule and he in fact is behind the machinations which causes the British Government to try to do everything in its power to the couple apart. And sure enough Alastair Canning, a spokesman for the Prime Minister Clement Atlee, becomes a constant worry and set-back to Seretse and Ruth. He refuses to let them see papers opposing the legalities of the marriage. Tony Benn (Jack Lowden) a rebel within the labour government sides with the couple and also they have the press on their side when Seretse tells them what is going on. Obviously, we the audience are rooting all will be good and believing that love really does conquer all. For this is a love story and should be remembered as such rather than an interracial love story, as the director Amma Asante and Rosamund Pike pointed out at the film’s press conference. The barriers and sacrifices that the couple have to face and overcome makes their union more significant. The film is a roller coaster ride of emotions but the dips are there and you may leave feeling somewhat disappointed that the ride could have be better. Parts if the story, though based on fact, seemed too politically correct and too eager to show that the African people were perfect and that the British politicians were seen to be constantly villainous. Perhaps the producers were unaware of this, but it was there and seemed obvious that they were trying to manipulate the audience just as in the story special papers were refused to be given to Seretse Kharma.

It must be mentioned that a highlight of the film was the magnificent cinematography of Sam McCurdy: the contrasting shots of London against those of Seretse’s homeland…yet juxtaposed in the romanticism. A United Kingdom as a love story is satisfying as long as one rules out the need to be so politically correct and was not worthy or entertaining enough to open the London Film Festival. However, though the film is at times splendidly visual, the story would I feel be better suited to television than the big screen of cinema as it seems lost in such ambiance.