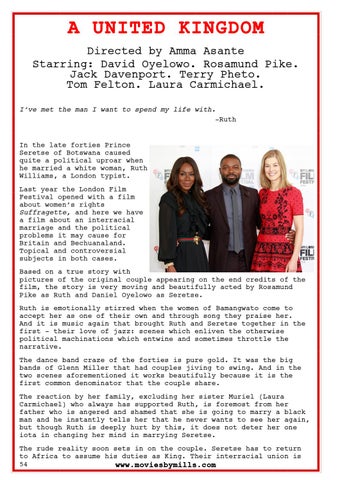 In the late forties Prince Seretse of Botswana caused quite a political uproar when he married a white woman, Ruth Williams, a London typist. Last year the London Film Festival opened with a film about women’s rights Suffragette, and here we have a film about an interracial marriage and the political problems it may cause for Britain and Bechuanaland. Topical and controversial subjects in both cases. Based on a true story with pictures of the original couple appearing on the end credits of the film, the story is very moving and beautifully acted by Rosamund Pike as Ruth and Daniel Oyelowo as Seretse. Ruth is emotionally stirred when the women of Bamangwato come to accept her as one of their own and through song they praise her. And it is music again that brought Ruth and Seretse together in the first – their love of jazz: scenes which enliven the otherwise political machinations which entwine and sometimes throttle the narrative. The dance band craze of the forties is pure gold. It was the big bands of Glenn Miller that had couples jiving to swing. And in the two scenes aforementioned it works beautifully because it is the first common denominator that the couple share. The reaction by her family, excluding her sister Muriel (Laura Carmichael) who always has supported Ruth, is foremost from her father who is angered and shamed that she is going to marry a black man and he instantly tells her that he never wants to see her again, but though Ruth is deeply hurt by this, it does not deter her one iota in changing her mind in marrying Seretse. The rude reality soon sets in on the couple. Seretse has to return to Africa to assume his duties as King. Their interracial union is 54 www.moviesbymills.com