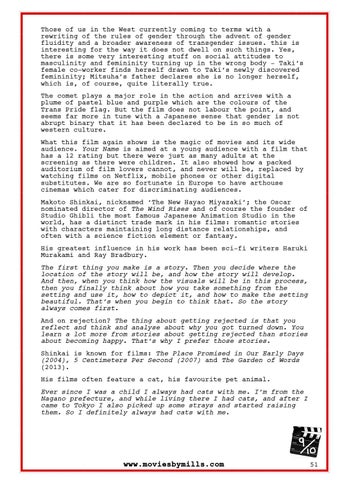 Those of us in the West currently coming to terms with a rewriting of the rules of gender through the advent of gender fluidity and a broader awareness of transgender issues. this is interesting for the way it does not dwell on such things. Yes, there is some very interesting stuff on social attitudes to masculinity and femininity turning up in the wrong body – Taki’s female co-worker finds herself drawn to Taki’s newly discovered femininity; Mitsuha’s father declares she is no longer herself, which is, of course, quite literally true. The comet plays a major role in the action and arrives with a plume of pastel blue and purple which are the colours of the Trans Pride flag. But the film does not labour the point, and seems far more in tune with a Japanese sense that gender is not abrupt binary that it has been declared to be in so much of western culture.

What this film again shows is the magic of movies and its wide audience. Your Name is aimed at a young audience with a film that has a 12 rating but there were just as many adults at the screening as there were children. It also showed how a packed auditorium of film lovers cannot, and never will be, replaced by watching films on Netflix, mobile phones or other digital substitutes. We are so fortunate in Europe to have arthouse cinemas which cater for discriminating audiences. Makoto Shinkai, nicknamed ‘The New Hayao Miyazaki’; the Oscar nominated director of The Wind Rises and of course the founder of Studio Ghibli the most famous Japanese Animation Studio in the world, has a distinct trade mark in his films: romantic stories with characters maintaining long distance relationships, and often with a science fiction element or fantasy. His greatest influence in his work has been sci-fi writers Haruki Murakami and Ray Bradbury. The first thing you make is a story. Then you decide where the location of the story will be, and how the story will develop. And then, when you think how the visuals will be in this process, then you finally think about how you take something from the setting and use it, how to depict it, and how to make the setting beautiful. That’s when you begin to think that. So the story always comes first. And on rejection? The reflect and think and learn a lot more from about becoming happy.

Shinkai is known for films: The Place Promised in Our Early Days (2004), 5 Centimeters Per Second (2007) and The Garden of Words (2013). His films often feature a cat, his favourite pet animal. Ever since I was a child I always had cats with me. I’m from the Nagano prefecture, and while living there I had cats, and after I came to Tokyo I also picked up some strays and started raising them. So I definitely always had cats with me.