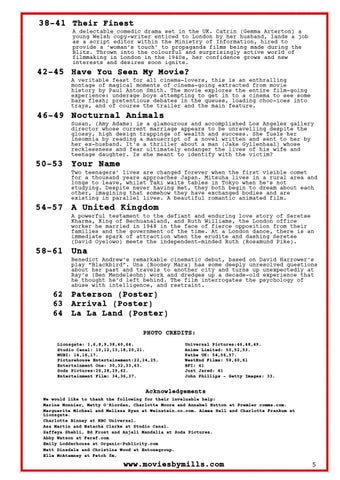 38-41 Their Finest A delectable comedic drama set in the UK. Catrin (Gemma Arterton) a young Welsh copy-writer enticed to London by her husband, lands a job as a script editor within the Ministry of Information, hired to provide a ‘woman’s touch’ to propaganda films being made during the Blitz. Thrown into the colourful and surprisingly active world of filmmaking in London in the 1940s, her confidence grows and new interests and desires soon ignite.

42-45 Have You Seen My Movie? A veritable feast for all cinema-lovers, this is an enthralling montage of magical moments of cinema-going extracted from movie history by Paul Anton Smith. The movie explores the entire film-going experience: underage boys attempting to get in to a cinema to see some bare flesh; pretentious debates in the queues, loading choc-ices into trays, and of course the trailer and the main feature.

46-49 Nocturnal Animals Susan, (Amy Adams) is a glamourous and accomplished Los Angeles gallery director whose current marriage appears to be unravelling despite the glossy, high design trappings of wealth and success. She fuels her insomnia by reading a manuscript of a novel written and sent to her by her ex-husband. It’s a thriller about a man (Jake Gyllenhaal) whose recklessness and fear ultimately endanger the lives of his wife and teenage daughter. Is she meant to identify with the victim?

50-53 Your Name Two teenagers’ lives are changed forever when the first visible comet for a thousand years approaches Japan. Mitsuha lives in a rural area and longs to leave, whilst Taki waits tables in Tokyo when he’s not studying. Despite never having met, they both begin to dream about each other, imagining that somehow they have exchanged bodies and are existing in parallel lives. A beautiful romantic animated film.

54-57 A United Kingdom A powerful testament to the defiant and enduring love story of Seretse Kharma, King of Bechuanaland, and Ruth Williams, the London office worker he married in 1948 in the face of fierce opposition from their families and the government of the time. At a London dance, there is an immediate spark of attraction when the erudite and dashing Seretse (David Oyelowo) meets the independent-minded Ruth (Rosamund Pike).

58-61 Una Benedict Andrew’s remarkable cinematic debut, based on David Harrower’s play “Blackbird”. Una (Rooney Mara) has some deeply unresolved questions about her past and travels to another city and turns up unexpectedly at Ray’s (Ben Mendelsohn) work and dredges up a decade-old experience that he thought he’d left behind. The film interrogates the psychology of abuse with intelligence, and restraint.