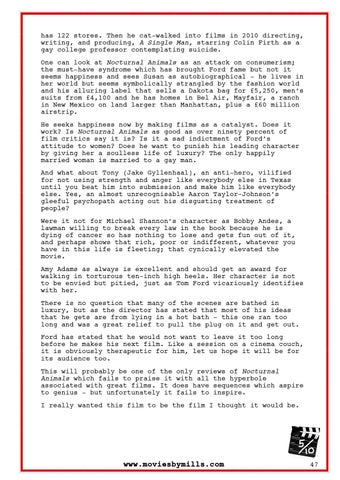 has 122 stores. Then he cat-walked into films in 2010 directing, writing, and producing, A Single Man, starring Colin Firth as a gay college professor contemplating suicide. One can look at Nocturnal Animals as an attack on consumerism; the must-have syndrome which has brought Ford fame but not it seems happiness and sees Susan as autobiographical – he lives in her world but seems symbolically strangled by the fashion world and his alluring label that sells a Dakota bag for £5,250, men’s suits from £4,100 and he has homes in Bel Air, Mayfair, a ranch in New Mexico on land larger than Manhattan, plus a £60 million airstrip. He seeks happiness now by making films as a catalyst. Does it work? Is Nocturnal Animals as good as over ninety percent of film critics say it is? Is it a sad indictment of Ford’s attitude to women? Does he want to punish his leading character by giving her a soulless life of luxury? The only happily married woman is married to a gay man. And what about Tony (Jake Gyllenhaal), an anti-hero, vilified for not using strength and anger like everybody else in Texas until you beat him into submission and make him like everybody else. Yes, an almost unrecognisable Aaron Taylor-Johnson’s gleeful psychopath acting out his disgusting treatment of people? Were it not for Michael Shannon’s character as Bobby Andes, a lawman willing to break every law in the book because he is dying of cancer so has nothing to lose and gets fun out of it, and perhaps shows that rich, poor or indifferent, whatever you have in this life is fleeting; that cynically elevated the movie. Amy Adams as always is excellent and should get an award for walking in torturous ten-inch high heels. Her character is not to be envied but pitied, just as Tom Ford vicariously identifies with her. There is no question that many of the scenes are bathed in luxury, but as the director has stated that most of his ideas that he gets are from lying in a hot bath – this one ran too long and was a great relief to pull the plug on it and get out.

Ford has stated that he would not want to leave it too long before he makes his next film. Like a session on a cinema couch, it is obviously therapeutic for him, let us hope it will be for its audience too. This will probably be one of the only reviews of Nocturnal Animals which fails to praise it with all the hyperbole associated with great films. It does have sequences which aspire to genius - but unfortunately it fails to inspire. I really wanted this film to be the film I thought it would be.