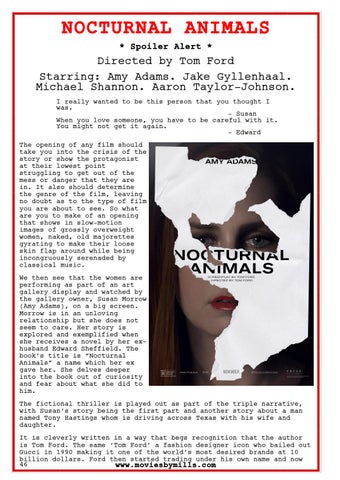 Directed by Tom Ford Starring: Amy Adams. Jake Gyllenhaal. Michael Shannon. Aaron Taylor-Johnson. I really wanted to be this person that you thought I was. - Susan When you love someone, you have to be careful with it. You might not get it again. - Edward The opening of any film should take you into the crisis of the story or show the protagonist at their lowest point struggling to get out of the mess or danger that they are in. It also should determine the genre of the film, leaving no doubt as to the type of film you are about to see. So what are you to make of an opening that shows in slow-motion images of grossly overweight women, naked, old majorettes gyrating to make their loose skin flap around while being incongruously serenaded by classical music. We then see that the women are performing as part of an art gallery display and watched by the gallery owner, Susan Morrow (Amy Adams), on a big screen. Morrow is in an unloving relationship but she does not seem to care. Her story is explored and exemplified when she receives a novel by her exhusband Edward Sheffield. The book’s title is “Nocturnal Animals” a name which her ex gave her. She delves deeper into the book out of curiosity and fear about what she did to him. The fictional thriller is played out as part of the triple narrative, with Susan’s story being the first part and another story about a man named Tony Hastings whom is driving across Texas with his wife and daughter.

It is cleverly written in a way that begs recognition that the author is Tom Ford. The same ‘Tom Ford’ a fashion designer icon who bailed out Gucci in 1990 making it one of the world’s most desired brands at 10 billion dollars. Ford then started trading under his own name and now 46 www.moviesbymills.com