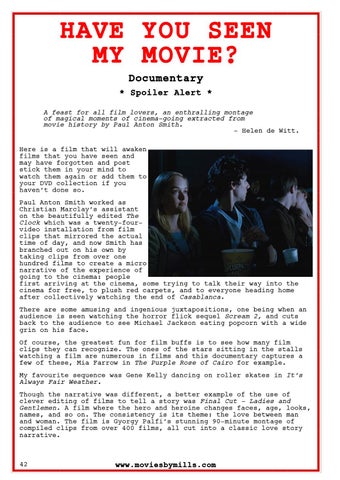 HAVE YOU SEEN MY MOVIE? Documentary * Spoiler Alert * A feast for all film lovers, an enthralling montage of magical moments of cinema-going extracted from movie history by Paul Anton Smith. - Helen de Witt. Here is a film that will awaken films that you have seen and may have forgotten and post stick them in your mind to watch them again or add them to your DVD collection if you haven’t done so. Paul Anton Smith worked as Christian Marclay’s assistant on the beautifully edited The Clock which was a twenty-fourvideo installation from film clips that mirrored the actual time of day, and now Smith has branched out on his own by taking clips from over one hundred films to create a micro narrative of the experience of going to the cinema: people first arriving at the cinema, some trying to talk their way into the cinema for free, to plush red carpets, and to everyone heading home after collectively watching the end of Casablanca. There are some amusing and ingenious juxtapositions, one being when an audience is seen watching the horror flick sequel Scream 2, and cuts back to the audience to see Michael Jackson eating popcorn with a wide grin on his face.

Of course, the greatest fun for film buffs is to see how many film clips they can recognize. The ones of the stars sitting in the stalls watching a film are numerous in films and this documentary captures a few of these, Mia Farrow in The Purple Rose of Cairo for example. My favourite sequence was Gene Kelly dancing on roller skates in It’s Always Fair Weather. Though the narrative was different, a better example of the use of clever editing of films to tell a story was Final Cut – Ladies and Gentlemen. A film where the hero and heroine changes faces, age, looks, names, and so on. The consistency is its theme: the love between man and woman. The film is Gyorgy Palfi’s stunning 90-minute montage of compiled clips from over 400 films, all cut into a classic love story narrative.