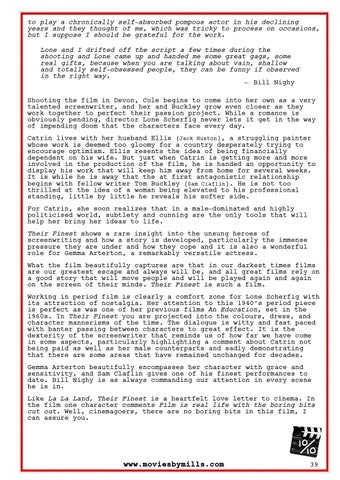 to play a chronically self-absorbed pompous actor in his declining years and they thought of me, which was tricky to process on occasions, but I suppose I should be grateful for the work. Lone and I drifted off the script a few times during the shooting and Lone came up and handed me some great gags, some real gifts, because when you are talking about vain, shallow and totally self-obsessed people, they can be funny if observed in the right way. - Bill Nighy Shooting the film in Devon, Cole begins to come into her own as a very talented screenwriter, and her and Buckley grow even closer as they work together to perfect their passion project. While a romance is obviously pending, director Lone Scherfig never lets it get in the way of impending doom that the characters face every day.

Catrin lives with her husband Ellis (Jack Huston), a struggling painter whose work is deemed too gloomy for a country desperately trying to encourage optimism. Ellis resents the idea of being financially dependent on his wife. But just when Catrin is getting more and more involved in the production of the film, he is handed an opportunity to display his work that will keep him away from home for several weeks. It is while he is away that the at first antagonistic relationship begins with fellow writer Tom Buckley (Sam Ciaflin). He is not too thrilled at the idea of a woman being elevated to his professional standing, little by little he reveals his softer side. For Catrin, she soon realizes that in a male-dominated and highly politicised world, subtlety and cunning are the only tools that will help her bring her ideas to life. Their Finest shows a rare insight into the unsung heroes of screenwriting and how a story is developed, particularly the immense pressure they are under and how they cope and it is also a wonderful role for Gemma Arterton, a remarkably versatile actress. What the film beautifully captures are that in our darkest times films are our greatest escape and always will be, and all great films rely on a good story that will move people and will be played again and again on the screen of their minds. Their Finest is such a film. Working in period film is clearly a comfort zone for Lone Scherfig with its attraction of nostalgia. Her attention to this 1940â&#x20AC;&#x2122;s period piece is perfect as was one of her previous films An Education, set in the 1960s. In Their Finest you are projected into the colours, dress, and character mannerisms of the time. The dialogue is witty and fast paced with banter passing between characters to great effect. It is the dexterity of the screenwriter that reminds us of how far we have come in some aspects, particularly highlighting a comment about Catrin not being paid as well as her male counterparts and sadly demonstrating that there are some areas that have remained unchanged for decades. Gemma Arterton beautifully encompasses her character with grace and sensitivity, and Sam Claflin gives one of his finest performances to date. Bill Nighy is as always commanding our attention in every scene he is in. Like La La Land, Their Finest is a heartfelt love letter to cinema. In the film one character comments Film is real life with the boring bits cut out. Well, cinemagoers, there are no boring bits in this film, I can assure you.