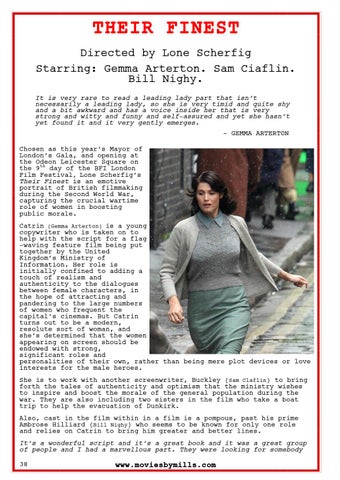 THEIR FINEST Directed by Lone Scherfig Starring: Gemma Arterton. Sam Ciaflin. Bill Nighy. It is very rare to read a leading lady part that isn’t necessarily a leading lady, so she is very timid and quite shy and a bit awkward and has a voice inside her that is very strong and witty and funny and self-assured and yet she hasn’t yet found it and it very gently emerges. - GEMMA ARTERTON Chosen as this year’s Mayor of London’s Gala, and opening at the Odeon Leicester Square on the 9th day of the BFI London Film Festival, Lone Scherfig’s Their Finest is an emotive portrait of British filmmaking during the Second World War, capturing the crucial wartime role of women in boosting public morale. Catrin (Gemma Arterton) is a young copywriter who is taken on to help with the script for a flag -waving feature film being put together by the United Kingdom’s Ministry of Information. Her role is initially confined to adding a touch of realism and authenticity to the dialogues between female characters, in the hope of attracting and pandering to the large numbers of women who frequent the capital’s cinemas. But Catrin turns out to be a modern, resolute sort of woman, and she’s determined that the women appearing on screen should be endowed with strong, significant roles and personalities of their own, rather than being mere plot devices or love interests for the male heroes. She is to work with another screenwriter, Buckley (Sam Claflin) to bring forth the tales of authenticity and optimism that the ministry wishes to inspire and boost the morale of the general population during the war. They are also including two sisters in the film who take a boat trip to help the evacuation of Dunkirk. Also, cast in the film within in a film is a pompous, past his prime Ambrose Hilliard (Bill Nighy) who seems to be known for only one role and relies on Catrin to bring him greater and better lines. It’s a wonderful script and it’s a great book and it was a great group of people and I had a marvellous part. They were looking for somebody 38