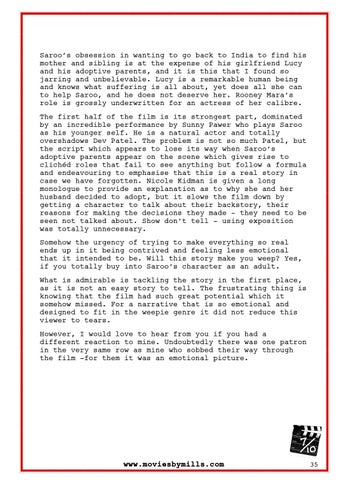 Saroo’s obsession in wanting to go back to India to find his mother and sibling is at the expense of his girlfriend Lucy and his adoptive parents, and it is this that I found so jarring and unbelievable. Lucy is a remarkable human being and knows what suffering is all about, yet does all she can to help Saroo, and he does not deserve her. Rooney Mara’s role is grossly underwritten for an actress of her calibre. The first half of the film is its strongest part, dominated by an incredible performance by Sunny Pawer who plays Saroo as his younger self. He is a natural actor and totally overshadows Dev Patel. The problem is not so much Patel, but the script which appears to lose its way when Saroo’s adoptive parents appear on the scene which gives rise to clichéd roles that fail to see anything but follow a formula and endeavouring to emphasise that this is a real story in case we have forgotten. Nicole Kidman is given a long monologue to provide an explanation as to why she and her husband decided to adopt, but it slows the film down by getting a character to talk about their backstory, their reasons for making the decisions they made – they need to be seen not talked about. Show don’t tell – using exposition was totally unnecessary.

Somehow the urgency of trying to make everything so real ends up in it being contrived and feeling less emotional that it intended to be. Will this story make you weep? Yes, if you totally buy into Saroo’s character as an adult. What is admirable is tackling the story in the first place, as it is not an easy story to tell. The frustrating thing is knowing that the film had such great potential which it somehow missed. For a narrative that is so emotional and designed to fit in the weepie genre it did not reduce this viewer to tears. However, I would love to hear from you if you had a different reaction to mine. Undoubtedly there was one patron in the very same row as mine who sobbed their way through the film -for them it was an emotional picture.