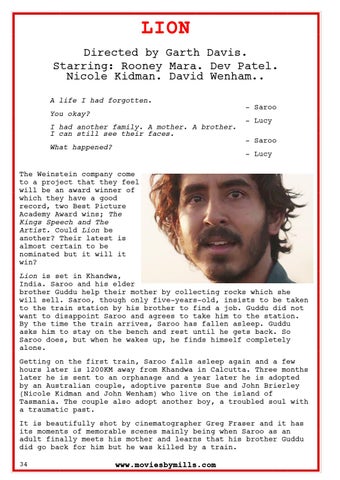 LION Directed by Garth Davis. Starring: Rooney Mara. Dev Patel. Nicole Kidman. David Wenham.. A life I had forgotten. You okay? I had another family. A mother. A brother. I can still see their faces. What happened?

The Weinstein company come to a project that they feel will be an award winner of which they have a good record, two Best Picture Academy Award wins; The Kings Speech and The Artist. Could Lion be another? Their latest is almost certain to be nominated but it will it win? Lion is set in Khandwa, India. Saroo and his elder brother Guddu help their mother by collecting rocks which she will sell. Saroo, though only five-years-old, insists to be taken to the train station by his brother to find a job. Guddu did not want to disappoint Saroo and agrees to take him to the station. By the time the train arrives, Saroo has fallen asleep. Guddu asks him to stay on the bench and rest until he gets back. So Saroo does, but when he wakes up, he finds himself completely alone. Getting on the first train, Saroo falls asleep again and a few hours later is 1200KM away from Khandwa in Calcutta. Three months later he is sent to an orphanage and a year later he is adopted by an Australian couple, adoptive parents Sue and John Brierley (Nicole Kidman and John Wenham) who live on the island of Tasmania. The couple also adopt another boy, a troubled soul with a traumatic past. It is beautifully shot by cinematographer Greg Fraser and it has its moments of memorable scenes mainly being when Saroo as an adult finally meets his mother and learns that his brother Guddu did go back for him but he was killed by a train. 34