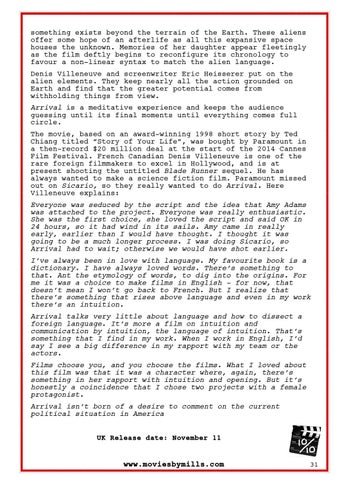 something exists beyond the terrain of the Earth. These aliens offer some hope of an afterlife as all this expansive space houses the unknown. Memories of her daughter appear fleetingly as the film deftly begins to reconfigure its chronology to favour a non-linear syntax to match the alien language. Denis Villeneuve and screenwriter Eric Heisserer put on the alien elements. They keep nearly all the action grounded on Earth and find that the greater potential comes from withholding things from view. Arrival is a meditative experience and keeps the audience guessing until its final moments until everything comes full circle. The movie, based on an award-winning 1998 short story by Ted Chiang titled “Story of Your Life”, was bought by Paramount in a then-record $20 million deal at the start of the 2014 Cannes Film Festival. French Canadian Denis Villeneuve is one of the rare foreign filmmakers to excel in Hollywood, and is at present shooting the untitled Blade Runner sequel. He has always wanted to make a science fiction film. Paramount missed out on Sicario, so they really wanted to do Arrival. Here Villeneuve explains: Everyone was seduced by the script and the idea that Amy Adams was attached to the project. Everyone was really enthusiastic. She was the first choice, she loved the script and said OK in 24 hours, so it had wind in its sails. Amy came in really early, earlier than I would have thought. I thought it was going to be a much longer process. I was doing Sicario, so Arrival had to wait; otherwise we would have shot earlier. I’ve always been in love with language. My favourite book is a dictionary. I have always loved words. There’s something to that. Ant the etymology of words, to dig into the origins. For me it was a choice to make films in English – for now, that doesn’t mean I won’t go back to French. But I realize that there’s something that rises above language and even in my work there’s an intuition. Arrival talks very little about language and how to dissect a foreign language. It’s more a film on intuition and communication by intuition, the language of intuition. That’s something that I find in my work. When I work in English, I’d say I see a big difference in my rapport with my team or the actors. Films choose you, and you choose the films. What I loved about this film was that it was a character where, again, there’s something in her rapport with intuition and opening. But it’s honestly a coincidence that I chose two projects with a female protagonist. Arrival isn’t born of a desire to comment on the current political situation in America