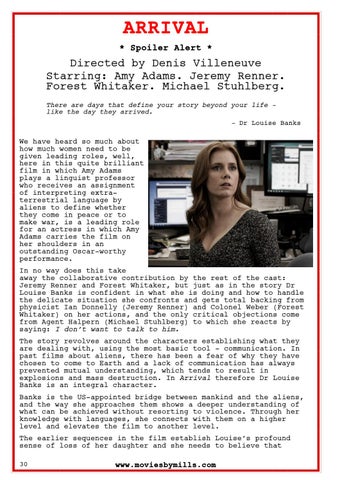 Directed by Denis Villeneuve Starring: Amy Adams. Jeremy Renner. Forest Whitaker. Michael Stuhlberg. There are days that define your story beyond your life – like the day they arrived. - Dr Louise Banks

We have heard so much about how much women need to be given leading roles, well, here in this quite brilliant film in which Amy Adams plays a linguist professor who receives an assignment of interpreting extraterrestrial language by aliens to define whether they come in peace or to make war, is a leading role for an actress in which Amy Adams carries the film on her shoulders in an outstanding Oscar-worthy performance. In no way does this take away the collaborative contribution by the rest of the cast: Jeremy Renner and Forest Whitaker, but just as in the story Dr Louise Banks is confident in what she is doing and how to handle the delicate situation she confronts and gets total backing from physicist Ian Donnelly (Jeremy Renner) and Colonel Weber (Forest Whitaker) on her actions, and the only critical objections come from Agent Halpern (Michael Stuhlberg) to which she reacts by saying: I don’t want to talk to him.

The story revolves around the characters establishing what they are dealing with, using the most basic tool – communication. In past films about aliens, there has been a fear of why they have chosen to come to Earth and a lack of communication has always prevented mutual understanding, which tends to result in explosions and mass destruction. In Arrival therefore Dr Louise Banks is an integral character. Banks is the US-appointed bridge between mankind and the aliens, and the way she approaches them shows a deeper understanding of what can be achieved without resorting to violence. Through her knowledge with languages, she connects with them on a higher level and elevates the film to another level.