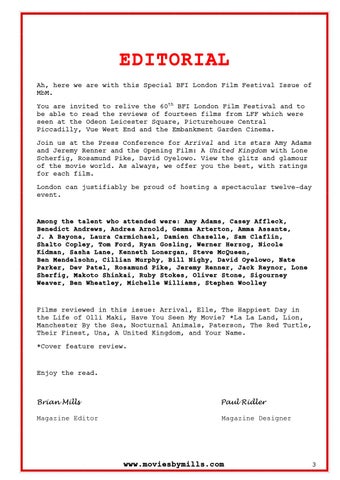 Join us at the Press Conference for Arrival and its stars Amy Adams and Jeremy Renner and the Opening Film: A United Kingdom with Lone Scherfig, Rosamund Pike, David Oyelowo. View the glitz and glamour of the movie world. As always, we offer you the best, with ratings for each film. London can justifiably be proud of hosting a spectacular twelve-day event.

Films reviewed in this issue: Arrival, Elle, The Happiest Day in the Life of Olli Maki, Have You Seen My Movie? *La La Land, Lion, Manchester By the Sea, Nocturnal Animals, Paterson, The Red Turtle, Their Finest, Una, A United Kingdom, and Your Name. *Cover feature review.