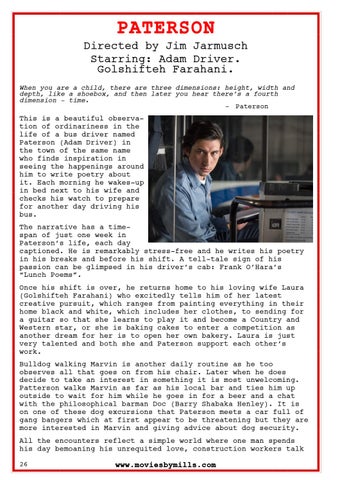 PATERSON Directed by Jim Jarmusch Starring: Adam Driver. Golshifteh Farahani. When you are a child, there are three dimensions: height, width and depth, like a shoebox, and then later you hear there’s a fourth dimension – time. - Paterson

This is a beautiful observation of ordinariness in the life of a bus driver named Paterson (Adam Driver) in the town of the same name who finds inspiration in seeing the happenings around him to write poetry about it. Each morning he wakes-up in bed next to his wife and checks his watch to prepare for another day driving his bus. The narrative has a timespan of just one week in Paterson’s life, each day captioned. He is remarkably stress-free and he writes his poetry in his breaks and before his shift. A tell-tale sign of his passion can be glimpsed in his driver’s cab: Frank O’Hara’s “Lunch Poems”. Once his shift is over, he returns home to his loving wife Laura (Golshifteh Farahani) who excitedly tells him of her latest creative pursuit, which ranges from painting everything in their home black and white, which includes her clothes, to sending for a guitar so that she learns to play it and become a Country and Western star, or she is baking cakes to enter a competition as another dream for her is to open her own bakery. Laura is just very talented and both she and Paterson support each other’s work. Bulldog walking Marvin is another daily routine as he too observes all that goes on from his chair. Later when he does decide to take an interest in something it is most unwelcoming. Patterson walks Marvin as far as his local bar and ties him up outside to wait for him while he goes in for a beer and a chat with the philosophical barman Doc (Barry Shabaka Henley). It is on one of these dog excursions that Paterson meets a car full of gang bangers which at first appear to be threatening but they are more interested in Marvin and giving advice about dog security.

All the encounters reflect a simple world where one man spends his day bemoaning his unrequited love, construction workers talk 26