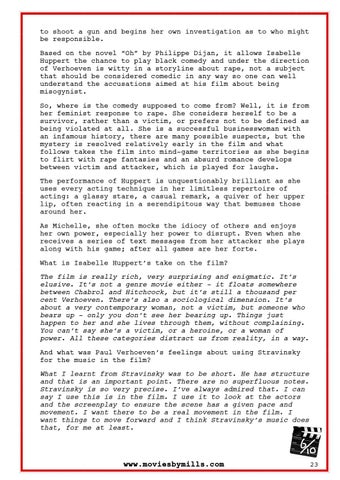 to shoot a gun and begins her own investigation as to who might be responsible. Based on the novel “Oh” by Philippe Dijan, it allows Isabelle Huppert the chance to play black comedy and under the direction of Verhoeven is witty in a storyline about rape, not a subject that should be considered comedic in any way so one can well understand the accusations aimed at his film about being misogynist. So, where is the comedy supposed to come from? Well, it is from her feminist response to rape. She considers herself to be a survivor, rather than a victim, or prefers not to be defined as being violated at all. She is a successful businesswoman with an infamous history, there are many possible suspects, but the mystery is resolved relatively early in the film and what follows takes the film into mind-game territories as she begins to flirt with rape fantasies and an absurd romance develops between victim and attacker, which is played for laughs. The performance of Huppert is unquestionably brilliant as she uses every acting technique in her limitless repertoire of acting: a glassy stare, a casual remark, a quiver of her upper lip, often reacting in a serendipitous way that bemuses those around her. As Michelle, she often mocks the idiocy of others and enjoys her own power, especially her power to disrupt. Even when she receives a series of text messages from her attacker she plays along with his game; after all games are her forte. What is Isabelle Huppert’s take on the film? The film is really rich, very surprising and enigmatic. It’s elusive. It’s not a genre movie either – it floats somewhere between Chabrol and Hitchcock, but it’s still a thousand per cent Verhoeven. There’s also a sociological dimension. It’s about a very contemporary woman, not a victim, but someone who bears up – only you don’t see her bearing up. Things just happen to her and she lives through them, without complaining. You can’t say she’s a victim, or a heroine, or a woman of power. All these categories distract us from reality, in a way. And what was Paul Verhoeven’s feelings about using Stravinsky for the music in the film? What I learnt from Stravinsky was to be short. He has structure and that is an important point. There are no superfluous notes. Stravinsky is so very precise. I’ve always admired that. I can say I use this is in the film. I use it to look at the actors and the screenplay to ensure the scene has a given pace and movement. I want there to be a real movement in the film. I want things to move forward and I think Stravinsky’s music does that, for me at least.