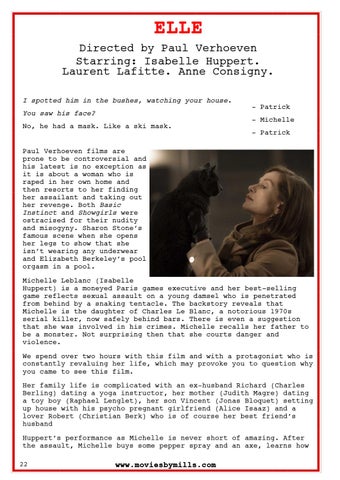 You saw his face? - Michelle No, he had a mask. Like a ski mask.

Paul Verhoeven films are prone to be controversial and his latest is no exception as it is about a woman who is raped in her own home and then resorts to her finding her assailant and taking out her revenge. Both Basic Instinct and Showgirls were ostracised for their nudity and misogyny. Sharon Stone’s famous scene when she opens her legs to show that she isn’t wearing any underwear and Elizabeth Berkeley’s pool orgasm in a pool. Michelle Leblanc (Isabelle Huppert) is a moneyed Paris games executive and her best-selling game reflects sexual assault on a young damsel who is penetrated from behind by a snaking tentacle. The backstory reveals that Michelle is the daughter of Charles Le Blanc, a notorious 1970s serial killer, now safely behind bars. There is even a suggestion that she was involved in his crimes. Michelle recalls her father to be a monster. Not surprising then that she courts danger and violence. We spend over two hours with this film and with a protagonist who is constantly revaluing her life, which may provoke you to question why you came to see this film. Her family life is complicated with an ex-husband Richard (Charles Berling) dating a yoga instructor, her mother (Judith Magre) dating a toy boy (Raphael Lenglet), her son Vincent (Jonas Bloquet) setting up house with his psycho pregnant girlfriend (Alice Isaaz) and a lover Robert (Christian Berk) who is of course her best friend’s husband

Huppert’s performance as Michelle is never short of amazing. After the assault, Michelle buys some pepper spray and an axe, learns how 22