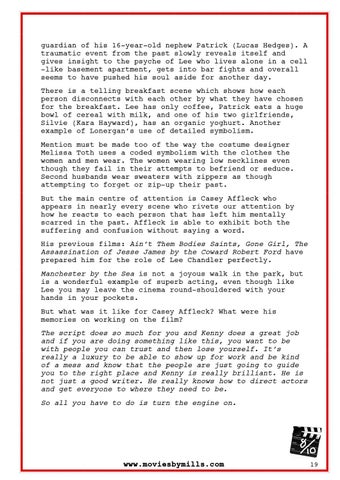 guardian of his 16-year-old nephew Patrick (Lucas Hedges). A traumatic event from the past slowly reveals itself and gives insight to the psyche of Lee who lives alone in a cell -like basement apartment, gets into bar fights and overall seems to have pushed his soul aside for another day. There is a telling breakfast scene which shows how each person disconnects with each other by what they have chosen for the breakfast. Lee has only coffee, Patrick eats a huge bowl of cereal with milk, and one of his two girlfriends, Silvie (Kara Hayward), has an organic yoghurt. Another example of Lonergan’s use of detailed symbolism. Mention must be made too of the way the costume designer Melissa Toth uses a coded symbolism with the clothes the women and men wear. The women wearing low necklines even though they fail in their attempts to befriend or seduce. Second husbands wear sweaters with zippers as though attempting to forget or zip-up their past. But the main centre of attention is Casey Affleck who appears in nearly every scene who rivets our attention by how he reacts to each person that has left him mentally scarred in the past. Affleck is able to exhibit both the suffering and confusion without saying a word. His previous films: Ain’t Them Bodies Saints, Gone Girl, The Assassination of Jesse James by the Coward Robert Ford have prepared him for the role of Lee Chandler perfectly. Manchester by the Sea is not a joyous walk in the park, but is a wonderful example of superb acting, even though like Lee you may leave the cinema round-shouldered with your hands in your pockets. But what was it like for Casey Affleck? What were his memories on working on the film? The script does so much for you and Kenny does a great job and if you are doing something like this, you want to be with people you can trust and then lose yourself. It’s really a luxury to be able to show up for work and be kind of a mess and know that the people are just going to guide you to the right place and Kenny is really brilliant. He is not just a good writer. He really knows how to direct actors and get everyone to where they need to be. So all you have to do is turn the engine on.