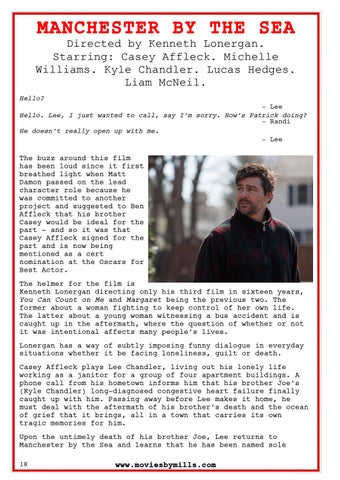 MANCHESTER BY THE SEA

The buzz around this film has been loud since it first breathed light when Matt Damon passed on the lead character role because he was committed to another project and suggested to Ben Affleck that his brother Casey would be ideal for the part – and so it was that Casey Affleck signed for the part and is now being mentioned as a cert nomination at the Oscars for Best Actor. The helmer for the film is Kenneth Lonergan directing only his third film in sixteen years, You Can Count on Me and Margaret being the previous two. The former about a woman fighting to keep control of her own life. The latter about a young woman witnessing a bus accident and is caught up in the aftermath, where the question of whether or not it was intentional affects many people’s lives. Lonergan has a way of subtly imposing funny dialogue in everyday situations whether it be facing loneliness, guilt or death. Casey Affleck plays Lee Chandler, living out his lonely life working as a janitor for a group of four apartment buildings. A phone call from his hometown informs him that his brother Joe’s (Kyle Chandler) long-diagnosed congestive heart failure finally caught up with him. Passing away before Lee makes it home, he must deal with the aftermath of his brother’s death and the ocean of grief that it brings, all in a town that carries its own tragic memories for him.

Upon the untimely death of his brother Joe, Lee returns to Manchester by the Sea and learns that he has been named sole 18