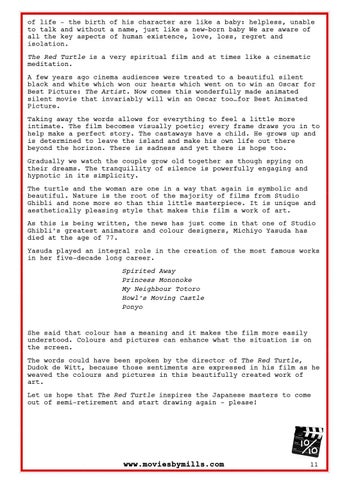 of life – the birth of his character are like a baby: helpless, unable to talk and without a name, just like a new-born baby We are aware of all the key aspects of human existence, love, loss, regret and isolation. The Red Turtle is a very spiritual film and at times like a cinematic meditation. A few years ago cinema audiences were treated to a beautiful silent black and white which won our hearts which went on to win an Oscar for Best Picture: The Artist. Now comes this wonderfully made animated silent movie that invariably will win an Oscar too…for Best Animated Picture. Taking away the words allows for everything to feel a little more intimate. The film becomes visually poetic; every frame draws you in to help make a perfect story. The castaways have a child. He grows up and is determined to leave the island and make his own life out there beyond the horizon. There is sadness and yet there is hope too. Gradually we watch the couple grow old together as though spying on their dreams. The tranquillity of silence is powerfully engaging and hypnotic in its simplicity. The turtle and the woman are one in a way that again is symbolic and beautiful. Nature is the root of the majority of films from Studio Ghibli and none more so than this little masterpiece. It is unique and aesthetically pleasing style that makes this film a work of art. As this is being written, the news has just come in that one of Studio Ghibli’s greatest animators and colour designers, Michiyo Yasuda has died at the age of 77. Yasuda played an integral role in the creation of the most famous works in her five-decade long career. Spirited Away Princess Mononoke My Neighbour Totoro Howl’s Moving Castle Ponyo

She said that colour has a meaning and it makes the film more easily understood. Colours and pictures can enhance what the situation is on the screen. The words could have been spoken by the director of The Red Turtle, Dudok de Witt, because those sentiments are expressed in his film as he weaved the colours and pictures in this beautifully created work of art. Let us hope that The Red Turtle inspires the Japanese masters to come out of semi-retirement and start drawing again – please!