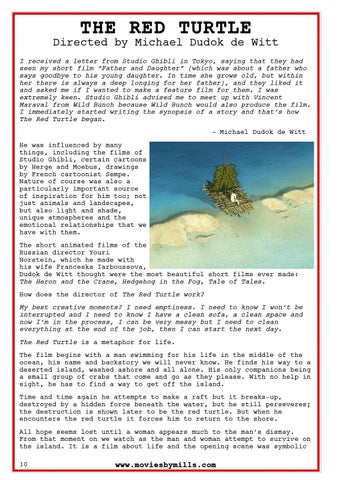 Directed by Michael Dudok de Witt I received a letter from Studio Ghibli in Tokyo, saying that they had seen my short film “Father and Daughter” (which was about a father who says goodbye to his young daughter. In time she grows old, but within her there is always a deep longing for her father), and they liked it and asked me if I wanted to make a feature film for them. I was extremely keen. Studio Ghibli advised me to meet up with Vincent Maraval from Wild Bunch because Wild Bunch would also produce the film. I immediately started writing the synopsis of a story and that’s how The Red Turtle began. - Michael Dudok de Witt He was influenced by many things, including the films of Studio Ghibli, certain cartoons by Herge and Moebus, drawings by French cartoonist Sempe. Nature of course was also a particularly important source of inspiration for him too; not just animals and landscapes, but also light and shade, unique atmospheres and the emotional relationships that we have with them. The short animated films of the Russian director Youri Norstein, which he made with his wife Franceska Iarboussova, Dudok de Witt thought were the most beautiful short films ever made: The Heron and the Crane, Hedgehog in the Fog, Tale of Tales. How does the director of The Red Turtle work? My best creative moments? I need emptiness. I need to know I won’t be interrupted and I need to know I have a clean sofa, a clean space and now I’m in the process, I can be very messy but I need to clean everything at the end of the job, then I can start the next day.

The Red Turtle is a metaphor for life. The film begins with a man swimming for his life in the middle of the ocean, his name and backstory we will never know. He finds his way to a deserted island, washed ashore and all alone. His only companions being a small group of crabs that come and go as they please. With no help in sight, he has to find a way to get off the island. Time and time again he attempts to make a raft but it breaks-up, destroyed by a hidden force beneath the water, but he still perseveres; the destruction is shown later to be the red turtle. But when he encounters the red turtle it forces him to return to the shore. All hope seems lost until a woman appears much to the man’s dismay. From that moment on we watch as the man and woman attempt to survive on the island. It is a film about life and the opening scene was symbolic 10