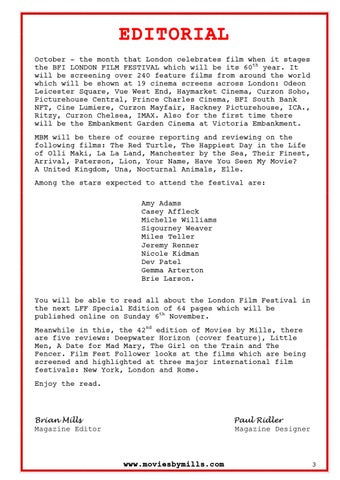 EDITORIAL October â&#x20AC;&#x201C; the month that London celebrates film when it stages the BFI LONDON FILM FESTIVAL which will be its 60th year. It will be screening over 240 feature films from around the world which will be shown at 19 cinema screens across London: Odeon Leicester Square, Vue West End, Haymarket Cinema, Curzon Soho, Picturehouse Central, Prince Charles Cinema, BFI South Bank NFT, Cine Lumiere, Curzon Mayfair, Hackney Picturehouse, ICA., Ritzy, Curzon Chelsea, IMAX. Also for the first time there will be the Embankment Garden Cinema at Victoria Embankment. MBM will be there of course reporting and reviewing on the following films: The Red Turtle, The Happiest Day in the Life of Olli Maki, La La Land, Manchester by the Sea, Their Finest, Arrival, Paterson, Lion, Your Name, Have You Seen My Movie? A United Kingdom, Una, Nocturnal Animals, Elle. Among the stars expected to attend the festival are: Amy Adams Casey Affleck Michelle Williams Sigourney Weaver Miles Teller Jeremy Renner Nicole Kidman Dev Patel Gemma Arterton Brie Larson. You will be able to read all about the London Film Festival in the next LFF Special Edition of 64 pages which will be published online on Sunday 6th November. Meanwhile in this, the 42nd edition of Movies by Mills, there are five reviews: Deepwater Horizon (cover feature), Little Men, A Date for Mad Mary, The Girl on the Train and The Fencer. Film Fest Follower looks at the films which are being screened and highlighted at three major international film festivals: New York, London and Rome. Enjoy the read.