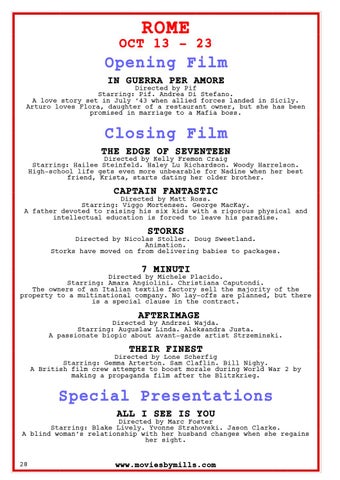 Opening Film IN GUERRA PER AMORE Directed by Pif Starring: Pif. Andrea Di Stefano. A love story set in July â&#x20AC;&#x2122;43 when allied forces landed in Sicily. Arturo loves Flora, daughter of a restaurant owner, but she has been promised in marriage to a Mafia boss.

CAPTAIN FANTASTIC Directed by Matt Ross. Starring: Viggo Mortensen. George MacKay. A father devoted to raising his six kids with a rigorous physical and intellectual education is forced to leave his paradise.

7 MINUTI Directed by Michele Placido. Starring: Amara Angiolini. Christiana Caputondi. The owners of an Italian textile factory sell the majority of the property to a multinational company. No lay-offs are planned, but there is a special clause in the contract.

Special Presentations ALL I SEE IS YOU Directed by Marc Foster Starring: Blake Lively. Yvonne Strahovski. Jason Clarke. A blind womanâ&#x20AC;&#x2122;s relationship with her husband changes when she regains her sight.