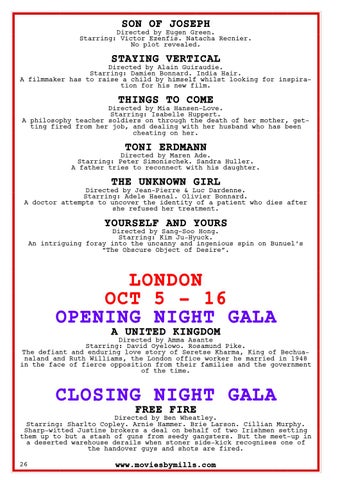 STAYING VERTICAL Directed by Alain Guiraudie. Starring: Damien Bonnard. India Hair. A filmmaker has to raise a child by himself whilst looking for inspiration for his new film.

THINGS TO COME Directed by Mia Hansen-Love. Starring: Isabelle Huppert. A philosophy teacher soldiers on through the death of her mother, getting fired from her job, and dealing with her husband who has been cheating on her.

THE UNKNOWN GIRL Directed by Jean-Pierre & Luc Dardenne. Starring: Adele Haenal. Olivier Bonnard. A doctor attempts to uncover the identity of a patient who dies after she refused her treatment.

YOURSELF AND YOURS Directed by Sang-Soo Hong. Starring: Kim Ju-Hyuck. An intriguing foray into the uncanny and ingenious spin on Bunuel’s “The Obscure Object of Desire”.

Directed by Amma Asante Starring: David Oyelowo. Rosamund Pike. The defiant and enduring love story of Seretse Kharma, King of Bechuanaland and Ruth Williams, the London office worker he married in 1948 in the face of fierce opposition from their families and the government of the time.

Directed by Ben Wheatley. Starring: Sharlto Copley. Arnie Hammer. Brie Larson. Cillian Murphy. Sharp-witted Justine brokers a deal on behalf of two Irishmen setting them up to but a stash of guns from seedy gangsters. But the meet-up in a deserted warehouse derails when stoner side-kick recognises one of the handover guys and shots are fired. 26