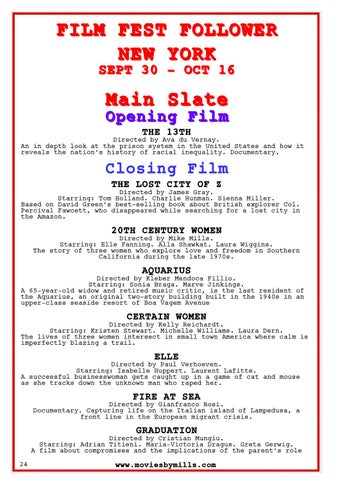 Main Slate Opening Film THE 13TH Directed by Ava du Vernay. An in depth look at the prison system in the United States and how it reveals the nation’s history of racial inequality. Documentary.

AQUARIUS Directed by Kleber Mendoca Fillio. Starring: Sonia Braga. Marve Jinkings. A 65-year-old widow and retired music critic, is the last resident of the Aquarius, an original two-story building built in the 1940s in an upper-class seaside resort of Boa Vagem Avenue

ELLE Directed by Paul Verhoeven. Starring: Isabelle Huppert. Laurent Lafitte. A successful businesswoman gets caught up in a game of cat and mouse as she tracks down the unknown man who raped her.

FIRE AT SEA Directed by Gianfranco Rosi. Documentary. Capturing life on the Italian island of Lampedusa, a front line in the European migrant crisis.

GRADUATION Directed by Cristian Mungiu. Starring: Adrian Titieni. Maria-Victoria Dragus. Greta Gerwig. A film about compromises and the implications of the parent’s role 24