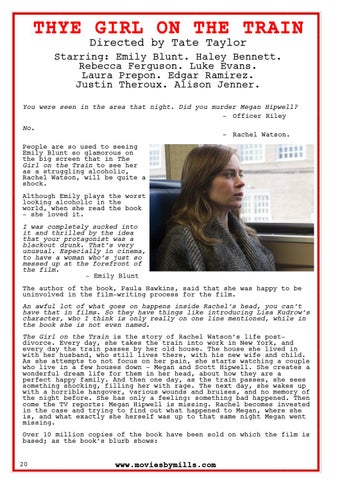 No. - Rachel Watson. People are so used to seeing Emily Blunt so glamorous on the big screen that in The Girl on the Train to see her as a struggling alcoholic, Rachel Watson, will be quite a shock. Although Emily plays the worst looking alcoholic in the world, when she read the book – she loved it. I was completely sucked into it and thrilled by the idea that your protagonist was a blackout drunk. That’s very unusual. Especially in cinema, to have a woman who’s just so messed up at the forefront of the film. - Emily Blunt The author of the book, Paula Hawkins, said that she was happy to be uninvolved in the film-writing process for the film. An awful lot of what goes on happens inside Rachel’s head, you can’t have that in films. So they have things like introducing Lisa Kudrow’s character, who I think is only really on one line mentioned, while in the book she is not even named. The Girl on the Train is the story of Rachel Watson’s life postdivorce. Every day, she takes the train into work in New York, and every day the train passes by her old house. The house she lived in with her husband, who still lives there, with his new wife and child. As she attempts to not focus on her pain, she starts watching a couple who live in a few houses down – Megan and Scott Hipwell. She creates a wonderful dream life for them in her head, about how they are a perfect happy family. And then one day, as the train passes, she sees something shocking, filling her with rage. The next day, she wakes up with a horrible hangover, various wounds and bruises, and no memory of the night before. She has only a feeling: something bad happened. Then come the TV reports: Megan Hipwell is missing. Rachel becomes invested in the case and trying to find out what happened to Megan, where she is, and what exactly she herself was up to that same night Megan went missing. Over 10 million copies of the book have been sold on which the film is based; as the book’s blurb shows: