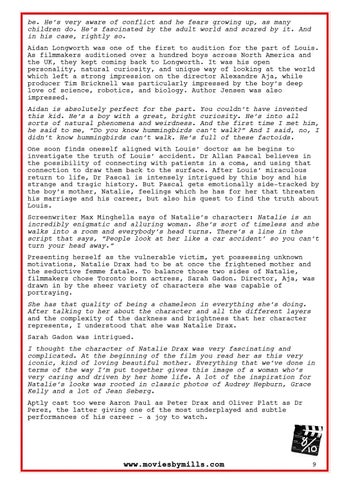 be. He’s very aware of conflict and he fears growing up, as many children do. He’s fascinated by the adult world and scared by it. And in his case, rightly so. Aidan Longworth was one of the first to audition for the part of Louis. As filmmakers auditioned over a hundred boys across North America and the UK, they kept coming back to Longworth. It was his open personality, natural curiosity, and unique way of looking at the world which left a strong impression on the director Alexandre Aja, while producer Tim Bricknell was particularly impressed by the boy’s deep love of science, robotics, and biology. Author Jensen was also impressed. Aidan is absolutely perfect for the part. You couldn’t have invented this kid. He’s a boy with a great, bright curiosity. He’s into all sorts of natural phenomena and weirdness. And the first time I met him, he said to me, “Do you know hummingbirds can’t walk?” And I said, no, I didn’t know hummingbirds can’t walk. He’s full of these factoids. One soon finds oneself aligned with Louis’ doctor as he begins to investigate the truth of Louis’ accident. Dr Allan Pascal believes in the possibility of connecting with patients in a coma, and using that connection to draw them back to the surface. After Louis’ miraculous return to life, Dr Pascal is intensely intrigued by this boy and his strange and tragic history. But Pascal gets emotionally side-tracked by the boy’s mother, Natalie, feelings which he has for her that threaten his marriage and his career, but also his quest to find the truth about Louis. Screenwriter Max Minghella says of Natalie’s character: Natalie is an incredibly enigmatic and alluring woman. She’s sort of timeless and she walks into a room and everybody’s head turns. There’s a line in the script that says, “People look at her like a car accident’ so you can’t turn your head away.” Presenting herself as the vulnerable victim, yet possessing unknown motivations, Natalie Drax had to be at once the frightened mother and the seductive femme fatale. To balance those two sides of Natalie, filmmakers chose Toronto born actress, Sarah Gadon. Director, Aja, was drawn in by the sheer variety of characters she was capable of portraying. She has that quality of being a chameleon in everything she’s doing. After talking to her about the character and all the different layers and the complexity of the darkness and brightness that her character represents, I understood that she was Natalie Drax. Sarah Gadon was intrigued. I thought the character of Natalie Drax was very fascinating and complicated. At the beginning of the film you read her as this very iconic, kind of loving beautiful mother. Everything that we’ve done in terms of the way I’m put together gives this image of a woman who’s very caring and driven by her home life. A lot of the inspiration for Natalie’s looks was rooted in classic photos of Audrey Hepburn, Grace Kelly and a lot of Jean Seberg.

Aptly cast too were Aaron Paul as Peter Drax and Oliver Platt as Dr Perez, the latter giving one of the most underplayed and subtle performances of his career – a joy to watch.