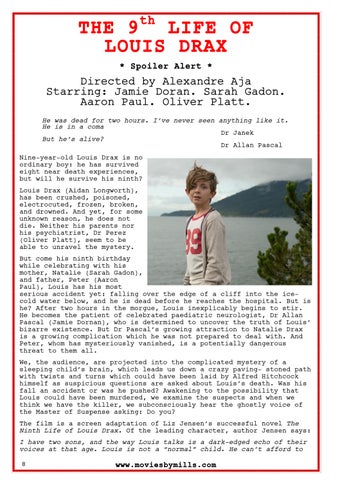 Directed by Alexandre Aja Starring: Jamie Doran. Sarah Gadon. Aaron Paul. Oliver Platt. He was dead for two hours. I’ve never seen anything like it. He is in a coma Dr Janek But he’s alive? Dr Allan Pascal Nine-year-old Louis Drax is no ordinary boy: he has survived eight near death experiences, but will he survive his ninth? Louis Drax (Aidan Longworth), has been crushed, poisoned, electrocuted, frozen, broken, and drowned. And yet, for some unknown reason, he does not die. Neither his parents nor his psychiatrist, Dr Perez (Oliver Platt), seem to be able to unravel the mystery. But come his ninth birthday while celebrating with his mother, Natalie (Sarah Gadon), and father, Peter (Aaron Paul), Louis has his most serious accident yet: falling over the edge of a cliff into the icecold water below, and he is dead before he reaches the hospital. But is he? After two hours in the morgue, Louis inexplicably begins to stir. He becomes the patient of celebrated paediatric neurologist, Dr Allan Pascal (Jamie Dornan), who is determined to uncover the truth of Louis’ bizarre existence. But Dr Pascal’s growing attraction to Natalie Drax is a growing complication which he was not prepared to deal with. And Peter, whom has mysteriously vanished, is a potentially dangerous threat to them all. We, the audience, are projected into the complicated mystery of a sleeping child’s brain, which leads us down a crazy paving- stoned path with twists and turns which could have been laid by Alfred Hitchcock himself as suspicious questions are asked about Louis’s death. Was his fall an accident or was he pushed? Awakening to the possibility that Louis could have been murdered, we examine the suspects and when we think we have the killer, we subconsciously hear the ghostly voice of the Master of Suspense asking: Do you? The film is a screen adaptation of Liz Jensen’s successful novel The Ninth Life of Louis Drax. Of the leading character, author Jensen says: I have two sons, and the way Louis talks is a dark-edged echo of their voices at that age. Louis is not a “normal” child. He can’t afford to 8