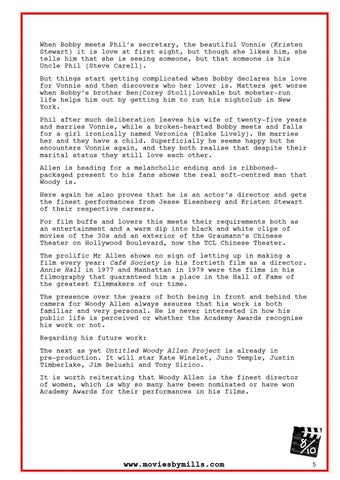 When Bobby meets Phil’s secretary, the beautiful Vonnie (Kristen Stewart) it is love at first sight, but though she likes him, she tells him that she is seeing someone, but that someone is his Uncle Phil (Steve Carell). But things start getting complicated when Bobby declares his love for Vonnie and then discovers who her lover is. Matters get worse when Bobby’s brother Ben(Corey Stoll)loveable but mobster-run life helps him out by getting him to run his nightclub in New York. Phil after much deliberation leaves his wife of twenty-five years and marries Vonnie, while a broken-hearted Bobby meets and falls for a girl ironically named Veronica (Blake Lively). He marries her and they have a child. Superficially he seems happy but he encounters Vonnie again, and they both realise that despite their marital status they still love each other. Allen is heading for a melancholic ending and is ribbonedpackaged present to his fans shows the real soft-centred man that Woody is. Here again he also proves that he is an actor’s director and gets the finest performances from Jesse Eisenberg and Kristen Stewart of their respective careers.

For film buffs and lovers this meets their requirements both as an entertainment and a warm dip into black and white clips of movies of the 30s and an exterior of the Graumann’s Chinese Theater on Hollywood Boulevard, now the TCL Chinese Theater. The prolific Mr Allen shows no sign of letting up in making a film every year: Café Society is his fortieth film as a director. Annie Hall in 1977 and Manhattan in 1979 were the films in his filmography that guaranteed him a place in the Hall of Fame of the greatest filmmakers of our time. The presence over the years of both being in front and behind the camera for Woody Allen always assures that his work is both familiar and very personal. He is never interested in how his public life is perceived or whether the Academy Awards recognise his work or not. Regarding his future work: The next as yet Untitled Woody Allen Project is already in pre-production. It will star Kate Winslet, Juno Temple, Justin Timberlake, Jim Belushi and Tony Sirico. It is worth reiterating that Woody Allen is the finest director of women, which is why so many have been nominated or have won Academy Awards for their performances in his films.