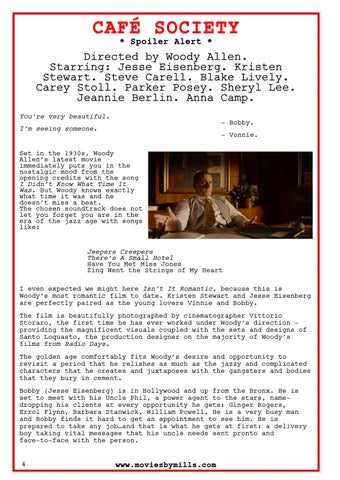 - Vonnie. Set in the 1930s, Woody Allen’s latest movie immediately puts you in the nostalgic mood from the opening credits with the song I Didn’t Know What Time It Was. But Woody knows exactly what time it was and he doesn’t miss a beat. The chosen soundtrack does not let you forget you are in the era of the jazz age with songs like:

Jeepers Creepers There’s A Small Hotel Have You Met Miss Jones Zing Went the Strings of My Heart I even expected we might here Isn’t It Romantic, because this is Woody’s most romantic film to date. Kristen Stewart and Jesse Eisenberg are perfectly paired as the young lovers Vinnie and Bobby. The film is beautifully photographed by cinematographer Vittorio Storaro, the first time he has ever worked under Woody’s direction – providing the magnificent visuals coupled with the sets and designs of Santo Loquasto, the production designer on the majority of Woody’s films from Radio Days. The golden age comfortably fits Woody’s desire and opportunity to revisit a period that he relishes as much as the jazzy and complicated characters that he creates and juxtaposes with the gangsters and bodies that they bury in cement. Bobby (Jesse Eisenberg) is in Hollywood and up from the Bronx. He is set to meet with his Uncle Phil, a power agent to the stars, namedropping his clients at every opportunity he gets: Ginger Rogers, Errol Flynn, Barbara Stanwick, William Powell. He is a very busy man and Bobby finds it hard to get an appointment to see him. He is prepared to take any job…and that is what he gets at first: a delivery boy taking vital messages that his uncle needs sent pronto and face-to-face with the person.