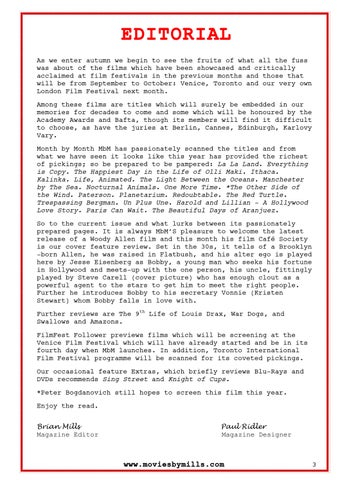 EDITORIAL As we enter autumn we begin to see the fruits of what all the fuss was about of the films which have been showcased and critically acclaimed at film festivals in the previous months and those that will be from September to October: Venice, Toronto and our very own London Film Festival next month. Among these films are titles which will surely be embedded in our memories for decades to come and some which will be honoured by the Academy Awards and Bafta, though its members will find it difficult to choose, as have the juries at Berlin, Cannes, Edinburgh, Karlovy Vary. Month by Month MbM has passionately scanned the titles and from what we have seen it looks like this year has provided the richest of pickings; so be prepared to be pampered: La La Land. Everything is Copy. The Happiest Day in the Life of Olli Maki. Ithaca. Kalinka. Life, Animated. The Light Between the Oceans. Manchester by The Sea. Nocturnal Animals. One More Time. *The Other Side of the Wind. Paterson. Planetarium. Redoubtable. The Red Turtle. Trespassing Bergman. Un Plus Une. Harold and Lillian – A Hollywood Love Story. Paris Can Wait. The Beautiful Days of Aranjuez. So to the current issue and what lurks between its passionately prepared pages. It is always MbM’S pleasure to welcome the latest release of a Woody Allen film and this month his film Café Society is our cover feature review. Set in the 30s, it tells of a Brooklyn -born Allen, he was raised in Flatbush, and his alter ego is played here by Jesse Eisenberg as Bobby, a young man who seeks his fortune in Hollywood and meets-up with the one person, his uncle, fittingly played by Steve Carell (cover picture) who has enough clout as a powerful agent to the stars to get him to meet the right people. Further he introduces Bobby to his secretary Vonnie (Kristen Stewart) whom Bobby falls in love with.

Further reviews are The 9th Life of Louis Drax, War Dogs, and Swallows and Amazons. FilmFest Follower previews films which will be screening at the Venice Film Festival which will have already started and be in its fourth day when MbM launches. In addition, Toronto International Film Festival programme will be scanned for its coveted pickings. Our occasional feature Extras, which briefly reviews Blu-Rays and DVDs recommends Sing Street and Knight of Cups. *Peter Bogdanovich still hopes to screen this film this year.