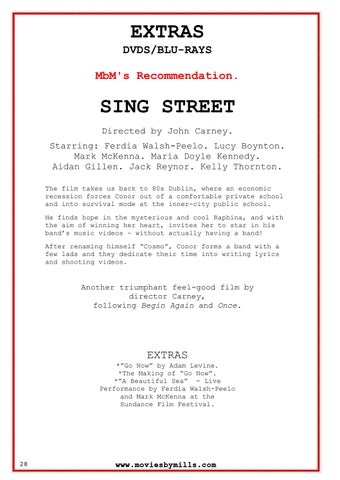 SING STREET Directed by John Carney. Starring: Ferdia Walsh-Peelo. Lucy Boynton. Mark McKenna. Maria Doyle Kennedy. Aidan Gillen. Jack Reynor. Kelly Thornton. The film takes us back to 80s Dublin, where an economic recession forces Conor out of a comfortable private school and into survival mode at the inner-city public school. He finds hope in the mysterious and cool Raphina, and with the aim of winning her heart, invites her to star in his band’s music videos – without actually having a band! After renaming himself “Cosmo”, Conor forms a band with a few lads and they dedicate their time into writing lyrics and shooting videos.

Another triumphant feel-good film by director Carney, following Begin Again and Once.