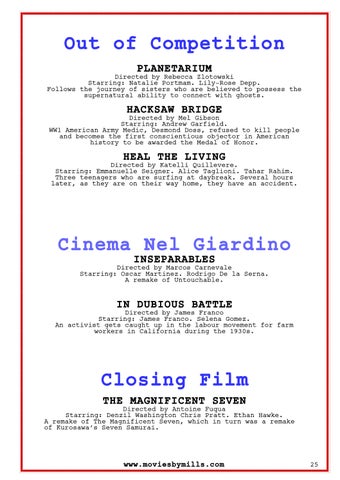 Out of Competition PLANETARIUM Directed by Rebecca Zlotowski Starring: Natalie Portmam. Lily-Rose Depp. Follows the journey of sisters who are believed to possess the supernatural ability to connect with ghosts.

HEAL THE LIVING Directed by Katelli Quillevere. Starring: Emmanuelle Seigner. Alice Taglioni. Tahar Rahim. Three teenagers who are surfing at daybreak. Several hours later, as they are on their way home, they have an accident.

IN DUBIOUS BATTLE Directed by James Franco Starring: James Franco. Selena Gomez. An activist gets caught up in the labour movement for farm workers in California during the 1930s.

Closing Film THE MAGNIFICENT SEVEN Directed by Antoine Fuqua Starring: Denzil Washington Chris Pratt. Ethan Hawke. A remake of The Magnificent Seven, which in turn was a remake of Kurosawaâ&amp;#x20AC;&amp;#x2122;s Seven Samurai.