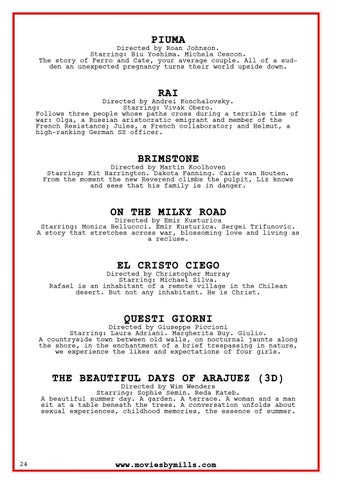 PIUMA Directed by Roan Johnson. Starring: Biu Yoshima. Michela Cescon. The story of Ferro and Cate, your average couple. All of a sudden an unexpected pregnancy turns their world upside down.

BRIMSTONE Directed by Martin Koolhoven Starring: Kit Harrington. Dakota Fanning. Carie van Houten. From the moment the new Reverend climbs the pulpit, Liz knows and sees that his family is in danger.

ON THE MILKY ROAD Directed by Emir Kusturica Starring: Monica Belluccci. Emir Kusturica. Sergei Trifunovic. A story that stretches across war, blossoming love and living as a recluse.

EL CRISTO CIEGO Directed by Christopher Murray Starring: Michael Silva. Rafael is an inhabitant of a remote village in the Chilean desert. But not any inhabitant. He is Christ.

QUESTI GIORNI Directed by Giuseppe Piccioni Starring: Laura Adriani. Margherita Buy. Giulio. A countryside town between old walls, on nocturnal jaunts along the shore, in the enchantment of a brief trespassing in nature, we experience the likes and expectations of four girls.

THE BEAUTIFUL DAYS OF ARAJUEZ (3D) Directed by Wim Wenders Starring: Sophie Semin. Reda Kateb. A beautiful summer day. A garden. A terrace. A woman and a man sit at a table beneath the trees. A conversation unfolds about sexual experiences, childhood memories, the essence of summer.