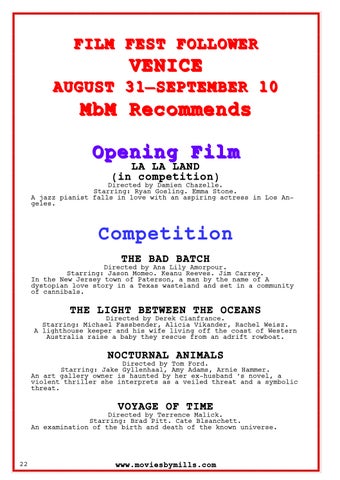 Competition THE BAD BATCH Directed by Ana Lily Amorpour. Starring: Jason Momeo. Keanu Reeves. Jim Carrey. In the New Jersey town of Paterson, a man by the name of A dystopian love story in a Texas wasteland and set in a community of cannibals.

THE LIGHT BETWEEN THE OCEANS Directed by Derek Cianfrance. Starring: Michael Fassbender, Alicia Vikander, Rachel Weisz. A lighthouse keeper and his wife living off the coast of Western Australia raise a baby they rescue from an adrift rowboat.

VOYAGE OF TIME Directed by Terrence Malick. Starring: Brad Pitt. Cate Blsanchett. An examination of the birth and death of the known universe.