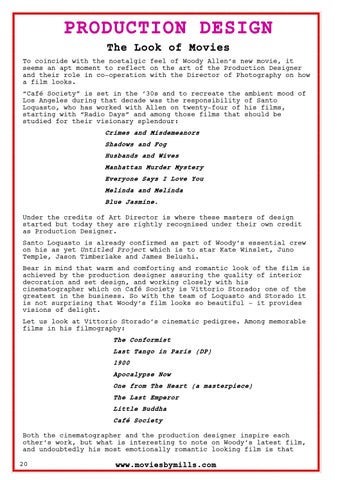 PRODUCTION DESIGN The Look of Movies To coincide with the nostalgic feel of Woody Allen’s new movie, it seems an apt moment to reflect on the art of the Production Designer and their role in co-operation with the Director of Photography on how a film looks. “Café Society” is set in the ‘30s and to recreate the Los Angeles during that decade was the responsibility Loquasto, who has worked with Allen on twenty-four of starting with “Radio Days” and among those films that studied for their visionary splendour:

ambient mood of of Santo his films, should be

Crimes and Misdemeanors Shadows and Fog Husbands and Wives Manhattan Murder Mystery Everyone Says I Love You Melinda and Melinda Blue Jasmine. Under the credits of Art Director is where these masters of design started but today they are rightly recognised under their own credit as Production Designer. Santo Loquasto is already confirmed as part of Woody’s essential crew on his as yet Untitled Project which is to star Kate Winslet, Juno Temple, Jason Timberlake and James Belushi. Bear in mind that warm and comforting and romantic look of the film is achieved by the production designer assuring the quality of interior decoration and set design, and working closely with his cinematographer which on Café Society is Vittorio Storado; one of the greatest in the business. So with the team of Loquasto and Storado it is not surprising that Woody’s film looks so beautiful – it provides visions of delight. Let us look at Vittorio Storado’s cinematic pedigree. Among memorable films in his filmography:

The Conformist Last Tango in Paris (DP) 1900 Apocalypse Now One from The Heart (a masterpiece) The Last Emperor Little Buddha Café Society Both the cinematographer and the production designer inspire each other’s work, but what is interesting to note on Woody’s latest film, and undoubtedly his most emotionally romantic looking film is that 20