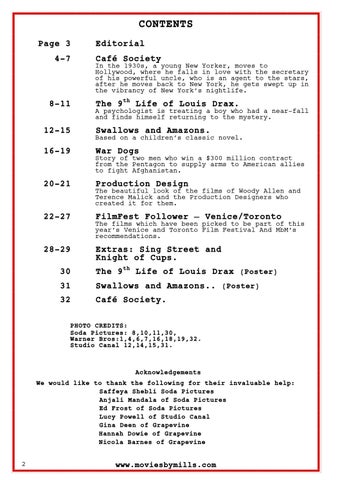 In the 1930s, a young New Yorker, moves to Hollywood, where he falls in love with the secretary of his powerful uncle, who is an agent to the stars, after he moves back to New York, he gets swept up in the vibrancy of New York’s nightlife.

The 9th Life of Louis Drax.

A psychologist is treating a boy who had a near-fall and finds himself returning to the mystery.

Swallows and Amazons. Based on a children’s classic novel.

Story of two men who win a $300 million contract from the Pentagon to supply arms to American allies to fight Afghanistan.

The beautiful look of the films of Woody Allen and Terence Malick and the Production Designers who created it for them.

FilmFest Follower — Venice/Toronto The films which have been picked to be part of this year’s Venice and Toronto Film Festival And MbM’s recommendations.